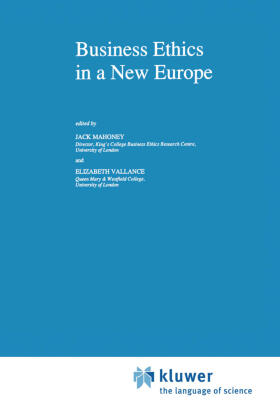 ETHICS IN THE MELTING-POT Jack Mahoney & Elizabeth Vallance Professor Jack Mahoney is Director of the King's College Business Ethics Research Centre, University of London, and Elizabeth Vallance is Visiting Professor in Politics at Queen Mary and Westfield College, University of London. AT lHE START of this century Israel Zangwill wrote of 'the great Melting­ Pot where all the races of Europe are melting and reforming'. He was, of course, writing about the USA and had the American immigration experience in mind; but today one need not cross the Atlantic to see Europe as a melting-pot and its members in a state of profound flux and mutation. In Western Europe, what began in mid-century as a largely Franco­ German attempt to prevent a recurrence of European war, by identifying and creating a common industrial policy in coal and steel, evolved by degrees into an industrial alliance of western European nations and the creation of a Single European Market. Originally six, then ten, and currently twelve, the number of member states of the European Economic Community, more recently the European Community, is still on the increase, as new countries apply to join and others consider a future approach.

I Views of the New Europe.- 1 My Vision of Business in Europe.- 2 A Vision of Business in Europe.- II Cultural Frameworks in a New Europe.- 3 Preserving Trust in a Pluralist Culture.- 4 Never the Twain? Ethics and Economics in Eastern and Western Europe.- III Learning from the Past.- 5 Robert Owen; a 19th-century Pilgrim's Progress in the World of European Business Ethics.- 6 Ethical Issues Arising from the London Underground King's Cross Fire.- IV Around Europe.- 7 Corporate Communications in a New Europe.- 8 A Director's View of Europe.- 9 The Privatization Process in Czechoslovakia.- 10 A Study of Ethical Views of Swedish Business Leaders.- 11 Ethical Aspects of Mergers and Acquisitions in Europe.- 12 The Future of Social Protection in Europe: An Economic and Ethical Problem.- V Ensuring Corporate Responsibility.- 13 American and European Corporate Ethics Practices: A 1991 Survey.- 14 Breathing New Life into a Corporate Code of Ethics.- VI Europe and Beyond.- 15 Business Ethics and the Greenhouse Problem.- 16 Environmental Conservation and the Chemical Industry.- 17 The New Europe from the Third World.