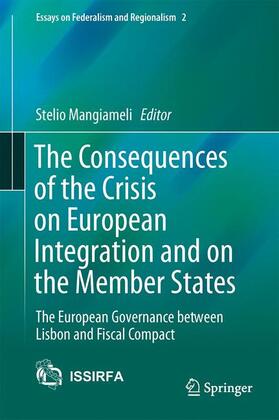 The European Governance between Lisbon and Fiscal Compact

The book examines the economic crisis in the European Union and its consequences for European integration and the member states. Discussing the provisions introduced by the Treaty of Lisbon, from the effects of macroeconomic monitoring to the restraints produced by the Fiscal Compact, it offers an analysis of the European Union’s current situation and the effects of the measures adopted to manage the crisis, also making reference to how Europe is perceived by its citizens. Moreover, the chapters offer thoughts on the European integration process, in particular the effects that the policies adopted to tackle the crisis have had on the economic and financial sovereignty of the member states. This detailed examination of the situation of the EU between the Treaty of Lisbon and the Fiscal Compact is characterized by an original multidisciplinary approach that offers an articulate reflection on the criticalities that affect the actions of both European and national institutions.

The Functioning of the European Union after the Lisbon Treaty and the Fiscal Compact by Antonio Brancasi.- Overcoming of Multilevel Theory, within Relationships among Europe, Member States and Subnational Levels of Government by Antonio Cantaro.- European Party System and Political Integration in Europe by Adriana Ciancio.- The European Parliament and the National Parliaments as a System by Andrea Manzella.- The Current State of the Governance of the Eurozone and the Increase in the European Democratic Deficit by Paola Bilancia.- The Impact of EU Policies on the Organization and Functioning of the Member State in the Midst of an Economic Recession by Enzo Di Salvatore.- Was it Appropriate to Include Structural Parity in the Constitution? A Discussion on the Cognitive Democracy Crisis by Paolo De Ioanna.- Rules and Procedures for Italy's Participation in the European Decision-Making Process: the System Outlines in Act 234/2012 and by the Regional Laws by Antonino Iacoviello.- Italy and European Economic Policies: it is Time to Change the Paradigm by Stefania Gabriele.- The Constitutional Sovereignty of Member States and European Constraints: the Difficult Path to Political Integration by Stelio Mangiameli.