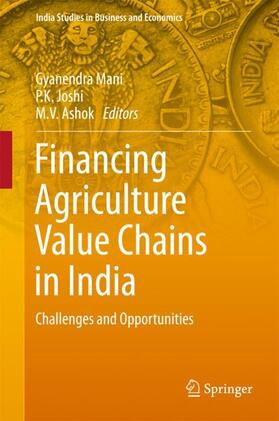 This book examines the successful private, public and civil society models of agriculture value chains in India and addresses relevant challenges and opportunities to improve their efficiency and inclusiveness. It promotes the value-chain approach as a tool to improve access to finance for small holder farmers and discusses the possible structure of and regulatory framework for the ‘National Common Agricultural Market’— a term that featured in the Indian Finance Minister’s 2014–15 budget speech, and which is aimed towards standardizing and improving transparency in agricultural trade practices across states under a single licensing system.

Mani, Gyanendra
Gyanendra Mani is currently the general manager and officer In-charge of the National Bank for Agriculture and Rural Development (NABARD), Arunachal Pradesh Regional Office (RO). He has a Ph.D. in Agricultural Economics from the G B Pant University of Agriculture & Technology, Pantnagar, Uttarakhand. He has conducted about 40 studies on behalf of the NABARD and published around 40 articles/research papers in Indian and International journals. He has handled several consultancy projects on behalf of the NABARD including 'Evaluation of SGSY Scheme' for the Ministry of Rural Development, Government of India (GOI). He also conceived the idea of and launched the 'THE MICROFINANCE REVIEW' Journal on behalf of the Bankers Institute of Rural Development (BIRD), Lucknow and was its managing editor from 2009 to 2015. As faculty of BIRD, he conducted two exposure visits of senior bankers to Israel and Netherlands. He is also a National Resource Person for the 'Design of Training' programme being conducted by the Department of Personnel and Training (DoPT), Government of India. P.K. Joshi is the director of the International Food Policy Research Institute (IFPRI) South Asia. Dr. Joshi has received several awards, including: the National Academy of Agricultural Sciences' Dr. M.S. Randhawa Memorial Award of (2009-11); and the Indian Society of Agricultural Economics' Prof R C Agarwal Lifetime Achievement Award and DK Desai Award. Dr. Joshi has also served as the chairman of the SAARC Agricultural Centre's governing board in Dhaka, Bangladesh (2006-08); chairman of the United Nations Centre for Alleviation of Poverty through Sustainable Agriculture (UN-CAPSA) governing board in Bogor, Indonesia (2007); and a member of the intergovernmental panel on the World Bank's International Assessment of Agricultural Science and Technology for Development (2007-08). He was a member of the International Steering Committee for the Climate Change, Agriculture and Food Security Challenge Program, led by the Earth System Science Partnership (ESSP) Science Community and the Consultative Group on International Agricultural Research (CGIAR) (2009-11). He is also president of the Agricultural Economics Research Association (India). M.V. Ashok is currently the chief general manager heading the Department of Economic Analysis & Research at the National Bank for Agriculture and Rural Development (NABARD) Head Office, Mumbai. He is a postgraduate in Agriculture from the Indian Agricultural Research Institute (IARI), New Delhi with additional qualifications in financing micro-enterprises from the UK, as well as financing agri-business management from the USA. His development banking experience spans 34 years with different banks like Canara Bank, Reserve Bank of India (RBI) and he has been with the NABARD since 1983. He has extensive contact with the rural finance sector in several countries including Thailand, Kenya, China, Germany, England and the USA.