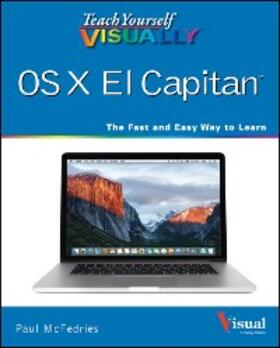 Your visual, guided tour of OS X El Capitan
With clear, step-by-step instructions and plenty of rich visuals, Teach Yourself Visually OS X El Capitan walks you through the latest updates of OS X and demonstrates the essential tasks you need to know. Complemented with screenshots on almost every page that illustrate exactly what you'll encounter, this visual guide will have you up and running with OS X--quickly and easily.
Boasting new visuals, several new features, and more seamless integration of iOS devices, the latest version of Mac's operating system has plenty to offer. You'll learn how to manipulate preferences to customize your experience, make the most of your digital media, and streamline your workflow while having a little fun. You will tour the Game Center, Messages, and Notifications, and get acquainted with Mission Control and the App Store--and much more.
* Customize your Mac to better suit your workflow
* Discover the newest updates to your favorite tools
* Navigate your way around OS X El Capitan
* Accomplish more in less time and make the most of your Mac

McFedries, Paul
Paul McFedries (Toronto, Ontario) is the president of Logophilia Limited, a technical writing company. He has been programming since he was a teenager in the mid-1970s, has programmed everything from mainframes to desktops to bar code scanners, and has worked with many different languages, including Fortran, assembly language, C++, and, of course, JavaScript. Paul has written more than three dozen books that have sold more than two million copies worldwide. These books include iPhone Portable Genius and Teach Yourself VISUALLY OS X Yosemite. Paul encourages all readers to drop by his Web site, mcfedries.com.