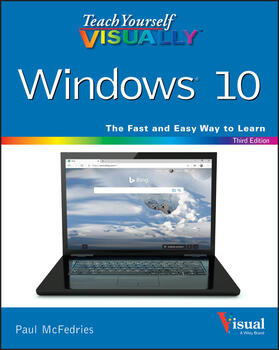 Master Windows 10 by reading only one book

The book includes hundreds of step-by-step and illustrated sets of instructions to teach you both the basics and the complexities of Windows 10 operation. Lessons include:
* Installing and repairing applications
* System maintenance
* Setting up password-protection
* Downloading photos
* Managing media files
* And more

Teach Yourself Visually Windows 10 combines the best of visual learning techniques with comprehensive source material about the interface and substance of Windows 10 to leave you with encyclopedic knowledge of the operating system.

Perfect for beginners and intermediate users alike, this book will turn your Windows-using experience from a slow slog into a lighting-fast masterclass of efficiency.

McFedries, Paul
Paul McFedries (Toronto, Ontario) is the president of Logophilia Limited, a technical writing company. He has been programming since he was a teenager in the mid-1970s, has programmed everything from mainframes to desktops to bar code scanners, and has worked with many different languages, including Fortran, assembly language, C++, and, of course, JavaScript. Paul has written more than four dozen books that have sold more than two million copies worldwide. These books include Windows 8 Visual Quick Tips, Teach Yourself VISUALLY Macs, 2nd Edition, Macs Portable Genius, and Teach Yourself VISUALLY Windows 10. Paul encourages all readers to drop by his Web site, www.mcfedries.com.