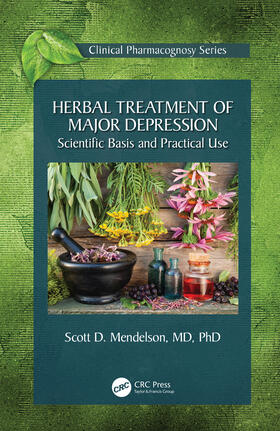 Scientific Basis and Practical Use

This unique volume presents new understandings of the neurochemical nature of major depression, and how herbs and their constituent flavonoids and terpenes appear to address some of the mechanisms now thought to be involved. It explores how recent studies of the rapid antidepressant effects of ketamine inform neuroscientists about deep intracellular mechanisms of antidepressant action that have little to do with simple enhancement of monoaminergic activity. These mechanisms include actions on PI3K, Akt, mTOR, GSK3, BDNF, and other intracellular pathways. New theories of the pathophysiology underlying major depression, such as oxidative damage, inflammation, stress and insulin resistance are then explored.
Key Features:

Focuses on oxidative damage, inflammation, and metabolic syndrome.
Explains that a significant percentage of people treated for major depression obtain little if any relief from standard antidepressant medications.
These facts lead to discussion of herbs that can be used to treat major depression, as well as consideration of the scientific basis for how these herbs act.
The antidepressant properties of 66 herbs are discussed, along with dosing and safety information.

2 How antidepressants work, but often do not

Mendelson, Scott D
Currently a practicing psychiatrist in Roseburg, Oregon, the author earned a Ph.D. in Biopsychology at The University of British Columbia, in Vancouver, British Columbia. He then worked for three years as a post-doctoral fellow at The Rockefeller University in the Laboratory of Neuroendocrinology under Bruce McEwen, Ph.D. During his doctoral work and as a post-doctoral fellow, he published 24 papers on the subjects of serotonergic and hormonal regulation of sexual behavior, and on the effects of stress on serotonin receptor subtypes in the brain. The author then attended medical school at The University of Illinois, and after graduating in 1996, he did his residency in psychiatry at The University of Virginia. In 2007, Elsevier published his first book, Metabolic Syndrome and Psychiatric Illness: Interactions, pathophysiology, assessment and treatment. In 2009, M. Evans published his second book, Beyond Alzheimer’s: How to avoid the modern epidemic of dementia