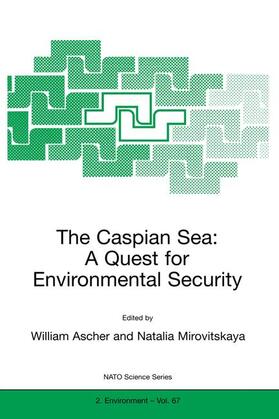 A Quest for Environmental Security

This volume is based on the presentations and deliberations of an Advanced Research Workshop (ARW) "Caspian Sea: A Quest for Environmental Security" that was held on March 15-19, 1999, in Venice (Italy). The Workshop was sponsored by the NATO's Division for Scientific and Environmental Affairs, with additional support provided by the Trust for Mutual Understanding (USA). It was organized by Duke University's Center for International Development Research with the guidance of the International Committee of scientists from Russia, United States. Georgia and Italy and organizational assistance rendered by Venice International University. The Caspian Sea region is of profound importance from the perspective of global and regional environmental security. New geopolitical and economic circumstances have created a mixture of competition. reluctant collaboration, and legal, political, economic and ideological wrangling. There is an intense debate over how the Caspian and its resources should be divided among littoral states and how these resources are to be developed. While most littoral states and the international companies strive to develop the area's immense hydrocarbon potential, it is clear that the Caspian's unique and fragile ecosystem is at risk.