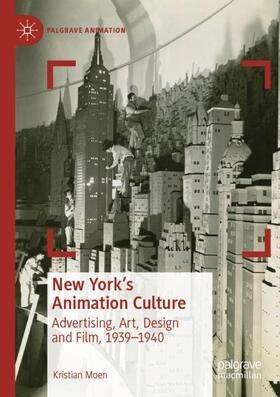 This book reveals and explores the thriving animation culture in midtown Manhattan, the World’s Fair, art galleries and cinemas during a vibrant period of artistic, commercial and industrial activity in New York City. Alongside a detailed investigation of animated film at the time – ranging from the abstract works of Mary Ellen Bute and Norman McLaren to the exhibition practices of the Disney Studios and the New York World’s Fair – New York’s Animation Culture examines a host of other animated forms, including moving dioramas, illuminated billboards, industrial displays, gallery exhibitions, mobile murals, and shop windows. In this innovative microhistory of animation, Moen combines the study of art, culture, design and film to offer a fine-grained account of an especially lively animation culture that was seen as creating new media, expanding the cinema experience, giving expression to utopian dreams of modernity, and presenting dynamic visions of a kinetic future.

Moen, Kristian
Kristian Moen is Senior Lecturer in Film at the University of Bristol. He is the author of Film and Fairy Tales: The Birth of Modern Fantasy, as well as a number of other works which explore animation, fantasy, film history and modernity.