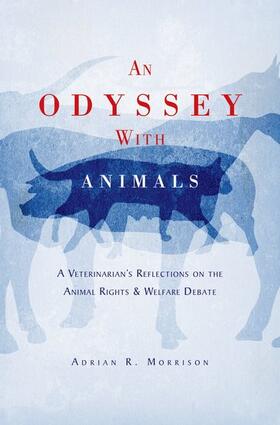 Morrison An Odyssey with Animals

A Veterinarian's Reflections on the Animal Rights & Welfare Debate

Morrison An Odyssey with Animals

A bitter controversy rages in Western society today: Is it unreasonably cruel to conduct biomedical research on animals? On one side lies a devoted (and, at times, aggressive and even violent) group of activists who believe animals are not human property, subject to our influence and interference. On the other are the researchers whose work developing life-saving medical treatments has hinged on the use of laboratory animals—and the patients who benefit from those
treatments. As a veterinarian and sleep researcher, Adrian Morrison understands both sides of the issue, as well as the passions it arouses. Animal use in biomedical research, he argues, is a necessary part of medical advancements that improve human health and quality of life. This is not a position
Morrison takes lightly, for he has been the victim of repeated acts of intimidation by animal-rights extremists, who vandalized his office and threatened his family. Refusing to be silenced, Morrison has written extensively on the humane but necessary use of laboratory animals, and was for three years director of the NIMH Program for Animal Research Issues. In this book, he offers the culmination of decades of reflection, scholarly research into the animal rights issue, and first-hand work with
animals. The result is a thought-provoking, intelligent, and fair-minded discussion of an emotionally charged subject.

Morrison, Adrian R
Adrian Morrison is Professor Emeritus of Behavioral Neuroscience at the University of Pennsylvania School of Veterinary Medicine. His research focuses on the neural control of sleep and wakefulness, with practical applications investigating REM sleep and sleep disorders. He has written extensively in the scientific publications of his specialty, such as the journals Sleep, Biological Psychiatry, and Behavioral Neuroscience. He is well-known as a
defender of the necessity of using animals in humane biomedical research and has written numerous articles and opinion pieces on the topic of animal welfare. For three years he served as Director of the Program for Animal Research Issues, National Institute of Mental Health.