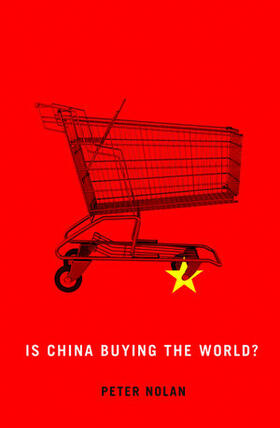 Nolan Is China Buying the World?

Nolan Is China Buying the World?

China has become the world's second biggest economy and its largest exporter. It possesses the world's largest foreign exchange reserves and has 29 companies in the FT 500 list of the world's largest companies. 'China's Rise' preoccupies the global media, which regularly carry articles suggesting that it is using its financial resources to 'buy the world'.

Is there any truth to this idea? Or is this just scaremongering by Western commentators who have little interest in a balanced presentation of China's role in the global political economy?

In this short book Peter Nolan - one of the leading international experts on China and the global economy - probes behind the media rhetoric and shows that the idea that China is buying the world is a myth. Since the 1970s the global business revolution has resulted in an unprecedented degree of industrial concentration. Giant firms from high income countries with leading technologies and brands have greatly increased their investments in developing countries, with China at the forefront. Multinational companies account for over two-thirds of China's high technology output and over ninety percent of its high technology exports. Global firms are deep inside the Chinese business system and are pressing China hard to be permitted to increase their presence without restraints.

By contrast, Chinese firms have a negligible presence in the high-income countries - in other words, we are 'inside them' but they are not yet 'inside us'. China's 70-odd 'national champion' firms are protected by the government through state ownership and other support measures. They are in industries such as banking, metals, mining, oil, power, construction, transport, and telecommunications, which tend to make use of high technology products rather than produce these products themselves. Their growth has been based on the rapidly growing home market. China has been unsuccessful so far in its efforts to nurture a group of globally competitive firms with leading global technologies and brands. Whether it will be successful in the future is an open question.

This balanced analysis replaces rhetoric with evidence and argument. It provides a much-needed perspective on current debates about China's growing power and it will contribute to a constructive dialogue between China and the West.

2.2 Evidence from automobiles and beverages 25

2.3 Globalization and going out by global firms 38

3.5 Multinational companies going in to China 84

3.6 Chinese fi rms going out of China into the high-income economies: I have you within me but you do not have me within you 95

3.7 Constraints on China buying the world 102

4 The Complexity of Us and Them : The Case of Strategic Industries 110

Is China buying the world? 132

The complexity of catching up 142

Nolan, Peter
Peter Nolan is Professor of Chinese Management at the University of Cambridge and Director of the Chinese Big Business Programme at the Judge Business School. He has been centrally involved in discussions about the integration of China with the global economy and business system. He has testified before the US Congress' US-China Economic and Security Review Commission and served as an Advisor to the World Bank.