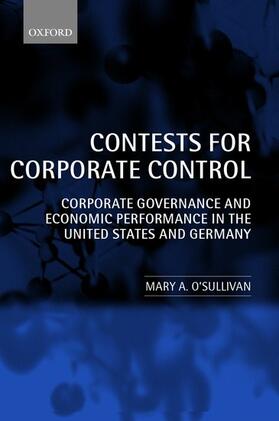 Corporate Governance and Economic Performance in the United States and Germany

During the 1990s, corporate governance became a hot issue in all of the advanced economies. For decades, major business corporations had reinvested earnings and developed long-term relations with their labour forces as they expanded the scale and scope of their operations. As a result, these corporations had made themselves central to resource allocation and economic performance in the national economies in which they had evolved. Then, beginning in the 1980s and
picking up momentum in the 1990s, came the contests for corporate control. Previously silent stockholders, now empowered by institutional investors, demanded that corporations be run to 'maximize shareholder value'. In the United States many, if not most, top corporate executives have now embraced this
ideology.

In this highly original book, Mary O'Sullivan provides a critical analysis of the theoretical foundations for the shareholder value principle of corporate governance and for the alternative perspective that corporations should be run in the interests of 'stakeholders'. She embeds her arguments on the relation between corporate governance and economic performance in historical accounts of the dynamics of corporate growth in the United States and Germany over the course of the twentieth century.
O'Sullivan explains the emergence and consequences of 'maximizing shareholder value' as a principle of corporate governance in the United States over the past two decades, and provides unique insights into the contests for corporate control that have unfolded in Germany over the past few years.

O'Sullivan, Mary
Mary A. O'Sullivan is an Assistant Professor of Strategy and Management at INSEAD, France. She received her undergraduate degree in 1988 from University College Dublin and then worked at McKinsey and Company, Inc. in London. She subsequently received an MBA from Harvard Business School and a Ph.D. in Business Economics from Harvard University. O'Sullivan has been a Visiting Scholar at the University of Tokyo and she is a Research Associate at both the STEP Group in
Oslo and the Levy Institute in New York. She is currently co-directing a project funded by the European Commission on 'Corporate Governance, Innovation, and Economic Performance'.