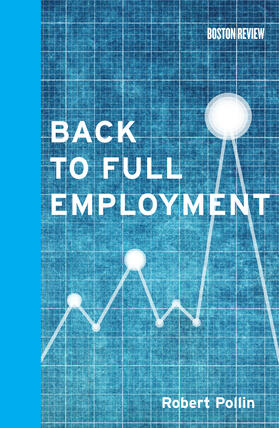 Pollin Back to Full Employment

Pollin Back to Full Employment

Full employment used to be an explicit goal of economic policy in most of the industrialized world. Some countries even achieved it. In Back to Full Employment, economist Robert Pollin argues that the United States--today faced with its highest level of unemployment since the Great Depression--should put full employment back on the agenda.There are good reasons to seek full employment, Pollin writes. Full employment will help individuals, families, and the economy as a whole, while promoting equality and social stability. Equally important, creating a full-employment economy can be joined effectively with two other fundamental policy aims: ending our dependence on fossil fuels and creating an economy powered by clean energy.Explaining views on full employment in macroeconomic theory from Marx to Keynes to Friedman, Pollin argues that the policy was abandoned in the United States in the 1970s for the wrong reasons, and he shows how it can be achieved today despite the serious challenges of inflation and globalization. Pollin believes the biggest obstacle to creating a full-employment economy is politics. Putting an end to the prevailing neoliberal opposition to full employment will require nothing less than an epoch-defining reallocation of political power away from the interests of big business and Wall Street and toward the middle class, working people, and the poor, while mounting a strong defense of the environment. In the end, achieving full employment will be a matter of political will: Can the United States make having a decent job a fundamental right?

Pollin, Robert
Robert Pollin is Professor of Economics and Codirector of the Political Economy Research Institute at the University of Massachusetts, Amherst. He is theauthor of Contours of Descent: U.S. Economic Fractures and the Landscape of Austerity and coauthor of A Measure of Fairness: The Economics of Living Wages and Minimum Wages in the United States.