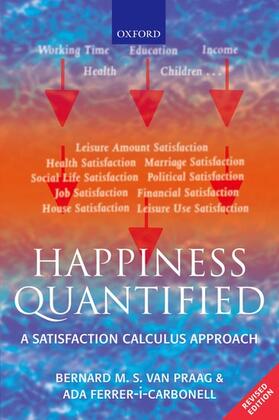 How do we measure happiness? Focusing on subjective measures as a proxy for welfare and well-being, this book finds ways to do that. Subjective measures have been used by psychologists, sociologists, political scientists, and, more recently, economists to answer a variety of scientifically and politically relevant questions. Van Praag, a pioneer in this field since 1971, and Ferrer-i-Carbonell present in this book a generally applicable methodology for the analysis
of subjective satisfaction.

Drawing on a range of surveys on people's satisfaction with their jobs, income, housing, marriages, and government policy, among other areas of life, this book shows how satisfaction with life "as a whole" is an aggregate of these domain satisfactions. Using German, British, Dutch, and Russian data, the authors cover a wide range of topics. This groundbreaking book presents a new and fruitful methodology that constitutes a welcome addition to the social sciences. The paperback edition has been
revised to bring the literature review up-to-date and the chapter on poverty has been revised and extended to take account of new research.

Academics and students in economics, sociology, and other social sciences concerned with the study of happiness and personal income in particular