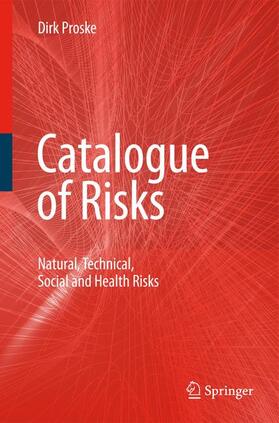 Since the German edition of this book, the topic of risk has experienced even greater attention, not only in the world of science but also in other fields, such as economics and politics. Therefore, many new publications have evolved. To keep with the idea of an encyclopedia for the topic of risk, this book has been completely reworked. Not only are many updated examples included in chapter “Risks and disasters” but also new chapters have been introduced, such as the chapter “Indetermination and risk”. This new chapter was developed since the question “Is it possible for risks to be completely eliminated, and if not why?” has become a major point of c- cern. Therefore, especially in this chapter, the focus of the book has - tended from a simple mathematical or engineering point of view to include much broader concepts. Here, not only aspects of system theory have to be considered, but also some general philosophical questions start to inf- ence the considerations of the topic of risk. The main goal of this edition, however, is not only the extension and revision of the book, but also the translation into the English language to allow more readers access to the ideas of the book. The author deeply hopes that the success the book made in the German edition continues and that readers experience a major gain from reading the book.

Dr. Proske studied civil engineering in Dresden, Germany and London, U.K. He worked in Germany, South Africa and Indonesia, before going into scientific research at the Technical University in Dresden, Germany. In 2003 he received an ESREL award. He continued his academic career in 2005 at the TU Delft in the Netherlands. Since 2006 he has served at the University of Life Sciences, Institute for Mountain Risk Engineering in Vienna, Austria.
For several years Dr. Proske has been co-organizer of the Dresden Bridge Construction Conference, which is the biggest conference concerning this topic in German speaking countries. In 2005 the event won the Dresden Conference Award. He is also the founder of the International Probabilistic Symposium/Workshop, which was started in Dresden in 2003/2004 and continued in Vienna in 2005, in Berlin in 2006 and in Ghent in 2007.
He has experience in teaching not only Structural Concrete and Masonry and Hazard and Risk Assessment, but also Integral Risk Management in Vienna.