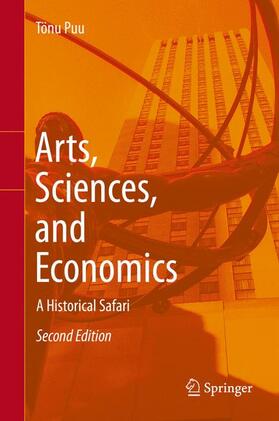 This book deals with the economic aspects of changing attitudes in arts and sciences. The effects of the public good character of culture, along with the very long production period and lifetime for its products, are emphasized, since both contribute to the failure of normal market solutions. Embodiment of ideas and the consequences of modern reproduction technology for protection of property rights are closely examined.

The evolution within arts and sciences, which often seems to return to previously scrapped ideals, is illustrated by detailed case studies, in which the importance of changing tastes, rather than progress proper, is emphasized.

The author attempts an understanding for this using Darwinian evolution in combination with modern mathematical complexity theory, expressed in terms accessible to the general reader.

The second edition is extended and updated especially as regards the illustration material.

Tõnu Puu is a Swedish economist of Estonian descent. Puu worked as acting full professor of Economics at Uppsala University 1963-1970, where he received his Ph.D. and was appointed ordinary Professor of Economics by Royal patent at Umeå University in 1971. After emeritation in 2001, he works as senior professor at the Centre for Regional Science (CERUM). In 2014 he was awarded the Doctor Jubilaris of Uppsala University. Puu has published over 20 books and 120 scholarly articles in economics, philosophy and mathematics. Topics studied include portfolio selection, investment and production, philosophy of science (in collaboration with Sir Karl Popper), spatial economics, economics of the arts, nonlinear dynamic processes, oligopoly and business cycles.

Puu was Founder and Director 1987-2001 of the Nordic Baroque Music Festival and received in that capacity the Prize for extraordinary promotion of culture, awarded by the county government. Other musical interests are playing the viola da gamba, and being a "luthier", making his own instruments.