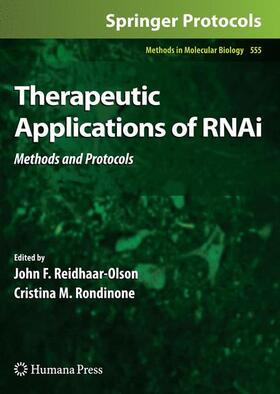 The phenomenon of RNA interference has rapidly moved from groundbreaking scientific discovery to promising therapeutic approach. However, even as RNAi-based drugs enter the clinic, significant challenges remain, particulary in the area of delivery. Therapeutic Applications of RNAi provides detailed protocols in key areas of current focus, including testing of delivery vehicles, identification of appropriate model systems, and evaluation of the effects of RNAi in vivo. Produced by a team of internationally renowned authors, the volume describes the therapeutic applications of RNAi and potential pitfalls in oncology, viral infections and CNS disease, using a variety of delivery methods, including liposomes, peptide-based nanoparticles, polycationic polymers, and viral vehicles. Written in the highly successful Methods in Molecular Biology™ series format, the chapters include brief introductions to their respective topics, lists of the necessary materials and reagents, step-by-step, readily reproducible laboratory protocols, and notes on troubleshooting and avoiding known pitfalls.

Authoritative and cutting-edge, Therapeutic Applications of RNAi is an ideal guide for scientists attempting to solve the numerous challenges in this field and revolutionize the treatment of disease.