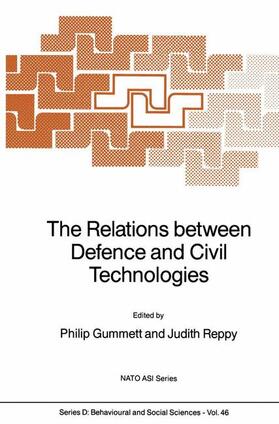 Reppy / Gummett The Relations between Defence and Civil Technologies

Reppy / Gummett The Relations between Defence and Civil Technologies

This book arises from a meeting held at Wiston House, Sussex, UK, in September 1987. The meeting brought together academic, governmental and industrial experts from eight countries to discuss the increasingly important sUbject of the relations between civil and defence technologies. It was primarily funded under the Advanced Research Workshops Programme of NATO's Scientific Affairs Division, and was the first science policy workshop funded by the Programme. Additional financial support came from the Leverhulme Trust. The choice of topic, of speakers and, finally, of papers to be published was entirely ours. The conclusions reached were our own and those of the partIcipants. They were not in any way guided by NATO; nor do they represent NATO policy. We speak for all the participants in offering our thanks to the NATO SCIentific Affairs Division, especially Secretary General Durand and Dr. Craig Sinclair, for rnei r- generosity and encouragement. WIthout them this book would not exist. We thank the Leverhulme Trust for enabling assistance to be provided to the Workshop Directors, in the form of lain Bate, who himself played a major part in the success of the meeting. The staff of Wiston House must also be thanked for prOViding an admirable environment for the meeting. For secretarial support prior to the meeting we thank Gill Miller and Lesley Price. Finally, we offer special thanks to Mrs. Yvonne Aspinall for converting all the papers, in whatever state they were presented, into camera-ready copy with such professionalism and gOOd humour.

1: Concepts, Approaches, Measurement.- 1. From components to integrated systems: Technological diversity and integrations between the military and civilian sectors.- 2. Spin-off: a fundamentalist approach.- 3. Some views on industry perspectives on civil and military R&D.- 4. Assessing the impact of federal industrial R&D expenditure on private R&D activity in the United States.- 5. Technology and Trade: Does military R&D make a difference?.- 6. The relationship between military and civil technology: a historical perspective.- 2: Country Studies.- 7. Interdiffusion of military and civil technologies in the United States of America.- 8. The need - and opportunity - for greater integration of defence and civil technologies in the United States.- 9. Civilian exploitation of defence R&D in the UK.- 10. A UK initiative for the transfer of technologies from defence to civil sector.- 11. The relationship between defence and civil technologies: policy of the French Ministry of Defence.- 12. Foreign technology and local innovation: some lessons from Spanish defence industry experience.- 13. Recent trends in R&D in Italy and in military R&D in particular.- 14. A small country perspective: military-civil technological relations in the Netherlands.- Part3. Indididual Technologies.- 15. Determinants of spin-off in the context of SDI: the VHSIC programme.- 16. Adaptation of new technology: the case of servo technology in Norway 1947-1956.- 17. Defence - civil relations in the development of new materials technology in Britain.- Participants.