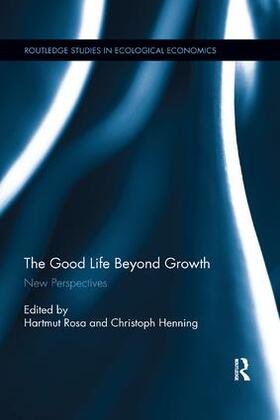 Many countries have experienced a decline of economic growth for decades, an effect that was only aggravated by the recent global financial crisis. What if in the 21st century this is no longer an exception, but the general rule? Does an economy without growth necessarily bring hardship and crises, as is often assumed? Or could it be a chance for a better life? Authors have long argued that money added to an income that already secures basic needs no longer enhances well-being. Also, ecological constraints and a sinking global absorption capacity increasingly reduce the margin of profitability on investments. Efforts to restore growth politically, however, often lead to reduced levels of social protection, reduced ecological and health standards, unfair tax burdens and rising inequalities. Thus it is time to dissolve the link between economic growth and the good life.
This book argues that a good life beyond growth is not only possible, but highly desirable. It conceptualizes "the good life" as a fulfilled life that is embedded in social relations and at peace with nature, independent of a mounting availability of resources. In bringing together experts from different fields, this book opens an interdisciplinary discussion that has often been restricted to separate disciplines. Philosophers, sociologists, economists and activists come together to discuss the political and social conditions of a good life in societies which no longer rely on economic growth and no longer call for an ever expanding circle of extraction, consumption, pollution, waste, conflict, and psychological burnout.
Read together, these essays will have a major impact on the debates about economic growth, economic and ecological justice, and the good life in times of crisis.

1 The Misadventures of the Good Life between Modernity and Degrowth:
From Happiness to Buen Vivir
Serge Latouche

3 Available, Accessible, Attainable.
The Mindset of Growth and the Resonance Conception of the Good Life
Hartmut Rosa

4 Resonance and the Romantic era:
A Comment on Rosa’s Conception of the Good life
Charles Taylor
II Beyond the Growth Paradigm: Alternative Conceptions of the Economic

6 Productivity, Property, and Violence: A Critique of liberal justifications of Growth
Christoph Henning

7 Growth regimes and visions of the good life: Why capitalism will not deliver
Dennis Eversberg

9 The Common Good as a Principle of Social Justice
Michael J. Thompson

14 Is Love still a Part of the Good Life?
Eva Illouz

16 Subjective Limits to Growth and the Limits to a Life-Style Oriented Critique of Growth
Stefanie Graefe
V One World without Growth: Alternative Conceptions of the Political

18 Cultures of Wellbeing in the South: Lessons to learn
Sarah White