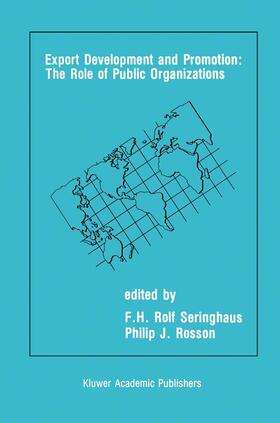 Companies succeed in international markets because of their competitive competence which, in large measure, is based on the level of knowledge and skill they bring to their international marketing activities. Public organizations in the export development and promotion field play a facilitating role in this process. Their mandate is to enhance the know-how of exporters and thereby assist foreign market entry, development and expansion. The interaction between these public organizations and the companies they exist to serve is the subject of this book. The book is wide-ranging and up-to-date. The work ofresearchers from 11 countries (in both the developed and developing world) is represented which means that a variety of perspectives are contained in the book. These contributions present the latest thinking on this important matter. The authors of each chapter are objective in their approach. Consequently, considerable attention is paid to the performance of the public organization support programs and activities. Each researcher comes to his/her own conclusions based on the individual work undertaken, but readers will fmd that certain common themes run through many ofthe chapters. The key objectives of the book are: 1. To provide academic researchers with a current and comprehensive treatment of the role played by public organizations in export development and promotion. 2. To expose professional readers (officials in relevant public organizations, consultants in the private sector or in international agencies) to a view of their field of interest that might be broader and more critical than normal.