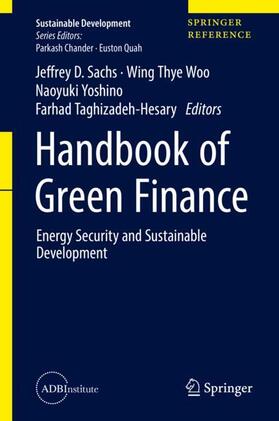 This handbook deals with various financial instruments, policies, and strategies in a policy-oriented approach for financing green energy projects. Recently, global investment in renewables and energy efficiency has declined, and there is a risk that it will slow further, Clearly, fossil fuels still dominate energy investments. This trend could threaten the expansion of green energy needed to meet energy security, climate, and clean-air goals. Several developed and developing economies are still following pro-coal energy policies. The extra CO2 generated from new coal-fired power plants could more than eliminate any reductions in emissions made by other nations.
Finance is the engine of development of infrastructural projects, including energy projects. By providing several thematic and country chapters, this handbook explains that if we plan to achieve sustainable development goals, we need to create opportunities for new green projects and scale up the financing of investments that furnish environmental benefits. New financial instruments and policies such as green bonds, green banks, carbon market instruments, fiscal policy, green central banking, fintech, and community-based green funds are among the chief components that make up green finance.
Naoyuki Yoshino is Dean, Asian Development Bank Institute and Professor Emeritus, Keio University. Jeffery Sachs is Director, Center for Sustainable Development at Columbia University. Wing Thye Woo is Professor of Economics, U.C. Davis. Farhad Taghizadeh-Hesary is Assistant Professor, Waseda University.

Sachs, Jeffrey D.
Jeffrey Sachs serves as Director of the Center for Sustainable Development at Columbia University. He is University Professor at Columbia University, the university's highest academic rank. During 2002 to 2016 he served as the Director of the Earth Institute. Sachs is Special Advisor to United Nations Secretary-General António Guterres on the Sustainable Development Goals, and previously advised UN Secretary-General Ban Ki-moon on both the Sustainable Development Goals and Millennium Development Goals and UN Secretary-General Kofi Annan on the Millennium Development Goals. Sachs is currently Director of the UN Sustainable Development Solutions Network under the auspices of UN Secretary-General António Guterres, and a Commissioner of the ITU/UNESCO Broadband Commission for Development. He is Chair and Founder of SDG USA, a non-governmental initiative to promote the Sustainable Development Goal concepts in the United States. Sachs is also co-founder and Chief Strategist of Millennium Promise Alliance, and was director of the Millennium Villages Project (2005-2015). Wing Thye Woo is Professor of Economics at University of California in Davis, and Director of Jeffrey Sachs Center on Sustainable Development at Sunway University in Kuala Lumpur. He also holds academic appointments at Fudan University in Shanghai, Columbia University in New York City, Penang Institute in George Town, and Chinese Academy of Social Sciences in Beijing. He is an expert on the East Asian economies, particularly, China, Indonesia and Malaysia. His current research focuses on designing efficient, equitable pathways to achieving the Sustainable Development Goals with projects on Green Finance, Middle Income Trap, and Global Economic Architecture for the Multi-Polar World. He has been convener of the Asian Economic Panel (AEP) since 2001, a forum of specialists on Asian economies which meets tri-annually to discuss important Asian economic issues and publishes the Asian Economic Papers (MIT Press). The University of California at Davis awarded him its Distinguished Scholarly Public Service Award in 2004; the Ministry of Education of China appointed him Chang Jiang Professor in 2006; the Governor of Penang conferred on him the title Dato in 2009; and the Thousand Talents Program of China appointed him a National Distinguished Expert in 2016. Naoyuki Yoshino is Dean of the Asian Development Bank Institute (ADBI), Chief Advisor at the Japan Financial Services Agency's (FSA) Financial Research Center (FSA Institute), and Professor Emeritus of Keio University, Tokyo, Japan. He obtained his PhD from Johns Hopkins University in 1979. His thesis supervisor was Sir Alan Walters, economic adviser to former British Prime Minister Margaret Thatcher. Dr. Yoshino has been a visiting scholar at the Massachusetts Institute of Technology (United States) and a visiting professor at various universities including the University of New South Wales (Australia), Fondation Nationale des Sciences Politiques (France), and University of Gothenburg (Sweden). He has also been an assistant professor at the State University of New York at Buffalo and an economics professor at Keio University. He was appointed as Chair of the Financial Planning Standards Board in 2007. He has served as Chairperson of the Japanese Ministry of Finance's Council on Foreign Exchange as well as its Fiscal System Council (Fiscal Investment and Loan Program Section). Additionally, he has been a Board Member of the Deposit Insurance Corporation of Japan and President of the Financial System Council of the Government of Japan. He was nominated for inclusion in Who's Who in the World for 2009 and 2013. In recognition of his wide-ranging scholarship and contribution to policy formulation, Dr. Yoshino was conferred honorary doctorates by the University of Go