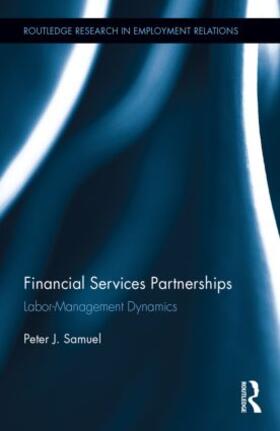 The purpose of this book is to evaluate the debate on partnership, using original research data.Samuelprovides a novel categorisation with which to synthesise and clarify a highly diverse literature on labour-management partnership, thus helping to refine the contemporary partnership debate. Secondly,he clarifies the circumstances under which ‘effective’ labour-management partnership is possible, while simultaneously elaborating why the achievement of ‘mutual gains’ is highly improbable in a liberal-market context. Thirdly,the book presents an integrated analysis of the interplay between macro-, meso- (industry) and micro-level factors. Fourthly, the research design enables the study to go beyond the case studies to make defendable empirical generalizations at the level of the industry. Finally, it advances a theoretical explanation of labour-management partnerships in ‘liberal market’ economies by bridging two opposing neo-institutional positions in the social sciences.

Samuel, Peter (University of Nottingham, UK)
Peter Samuel was a HRM Lecturer at Nottingham University Business School. He has made numerous contributions to international conferences. Heearned his PhD in Industrial Relations at Cardiff Business School. He now specializes in public sector issues and has published in Industrial Relations Journal and Work, Employment and Society.

Dr. Peter Samuel, 1957 – 2013
Thursday 19th December, 2013
Dr Peter Samuel, who has died suddenly of stroke, was an alumnus, ex-colleague and dear friend to many at Cardiff Business School.
Peter joined the School in 1999 as part of the second cohort of the MSc in Human Resource Management. This was an outstanding group of students, several of whom went on to doctoral work and then to academic careers.
Peter excelled within this group and graduated from the Masters programme in 2000 with a very strong distinction. He then joined the Cardiff Doctoral Programme, with a grant from the ESRC, to undertake research on labour-management partnership in the financial services sector.
Peter's research examined a major change in the industrial relations of this pivotal UK industry, analysing the origins and content of partnership agreements between management and trade unions and offering a detailed qualitative assessment of their strengths and weaknesses. Several articles have been published from this study and shortly before Peter's death a book presenting the main findings, Financial Services Partnerships: Labor-Management Dynamics, was published by Routledge.
During Peter's doctoral research he taught extensively on undergraduate and postgraduate programmes within the School. He also met his wife, Sakshi, another student on the MSc Human Resource Management, and they were married in Cardiff in 2002. Their daughter, Natasha, was born in 2003.
Peter completed and was awarded his doctorate in 2005 but before then he had moved on from the School to take up his first lecturing position at UWIC, now Cardiff Metropolitan University. This appointment was followed shortly afterwards by a move to Nottingham University Business School in 2005 to the post of Lecturer in Employment Relations, a position he continued to hold until his untimely death.
At Nottingham, Peter maintained his interest in partnership and developed a very fruitful, research collaboration with Professor Nick Bacon. Peter and Nick published influential articles surveying the development of partnership arrangements across UK business in Work, Employment and Society, and launched a major new study of partnership working in the National Health Services of the devolved governments of Scotland and Wales. The results of this ESRC-funded research will be published from 2014 onwards.
Throughout his time at Nottingham Peter maintained close links with Cardiff Business School. He was born in Cardiff and his mother still lives here and he was a frequent visitor to the city and to the School. He had lots of friends within the School and will be sorely missed.
Edmund Heery, Professor of Employment Relations, Human Resource Management section