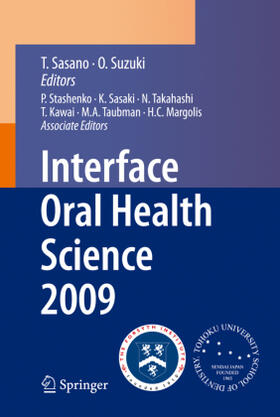 Proceedings of the 3rd International Symposium for Interface Oral Health Science, Held in Sendai, Japan, Between January 15 and 16, 2009 and the 1st Tohoku-Forsyth Symposium, Held in Boston, MA, USA, Between March 10 and 11, 2009

Since 2002, the Tohoku University Graduate School of Dentistry has proposed “Interface Oral Health Science” as a major theme for next-generation dental research. That theme is based on the following new concept: healthy oral fu- tion is maintained by biological and biomechanical harmony among three s- tems: (1) oral tissues (host); (2) parasitic microorganisms of the oral cavity (parasites); and (3) biomaterials. The concept implies that oral diseases such as dental caries, periodontal disease, and temporomandibular disorders should be interpreted as “interface disorders” that result from disruption of the intact int- face among these systems. The uniqueness of this concept rests on the fact that it not only encompasses the field of dentistry and dental medicine, but also expands the common ground shared with other fields, including medicine, ag- culture, material science, engineering, and pharmacology. We aim to promote advances in dental research and to activate collaboration with related fields by putting interface oral health science into practice. On this basis, we have already organized the 1st and 2nd International Symposiums for Interface Oral Health Science, which included inspiring special lectures, symposiums, poster pres- tations, and other discussions. The contents of the two symposiums were p- lished as monographs entitled Interface Oral Health Science in 2005 and 2007. The 3rd International Symposium was held in January 2009 as part of this project.