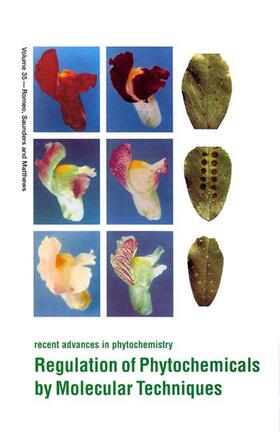 The papers assembled in this volume were originally presented at the joint meeting of the Phytochemical Society of North America and the Mid-Atlantic Plant Molecular Biology Society, in August 2000. The symposium from which these chapters were prepared was entitled "Regulation of Phytochemicals by Molecular Techniques" and was organised by James Saunders and Ben Matthews. This joint meeting was timely because of recent landmark advances in molecular biology and genomics as well as the renewed interest in phytochemistry as a rich source of nutraceuticals, drugs, and alternatives to synthetic agriculture pesticides. Progress in genome sequencing in plants such as Arabidopsis and rice has been remarkable, as have expressed sequence tag (EST) projects in other plants, including maize and soybean. Recently, private and public sector participants of the Human Genome Project announced that a rough draft of the human genome has been constructed. These advances directly influence phytochemical investigations by providing both insight and tools for exploring and manipulating genomes.

The chapters cover a wide range of applications from molecular biology to phytochemistry, and from basic studies on promoters and gene expression to pathway regulation and engineering with transformed plants. A number of noteworthy aspects emerge from this volume: applications of molecular biology to phytochemical practical problems are succeeding; newly emerging molecular tools promise to open new doors to discovery; and remarkable progress has already occurred in phytochemical pathway engineering.