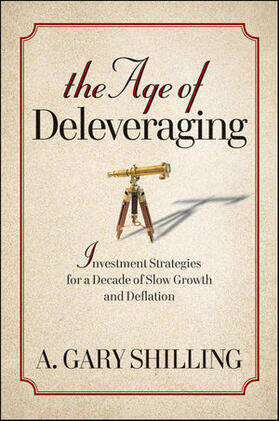 Shilling The Age of Deleveraging

Investment Strategies for a Decade of Slow Growth and Deflation

Shilling The Age of Deleveraging

"You will be a better investor having read this book. I cannot recommend it (the book) strongly enough."
--Dennis Gartman, from the Foreword, The Gartman Letter

". brilliantly exposes the delusions of the bullish consensus. one of the sharpest thinkers on economic issues and their market implications. This is a must-read book for all."
--Nouriel Roubini,Professor of Economics

"Gary Shilling is rarer than a black swan; he's an economist who foresaw deflation. Shilling has predicted the ' impossible' several times in his career, so his colleagues should no longer be surprised when he turns out right."
--Robert R. Prechter Jr.,Author of Conquer the Crash

"Ignore Gary at the peril of your investment portfolio. Let him show you alternatives that will work in a world of deleveraging, deflation, and slower growth."
--John Mauldin, President, Millennium Wave Advisors

"The acid test of advice: those who followed Gary's not-always-popular advice during these turbulent times made money. This man is an original-and well worth listening to."
-- Steve Forbes,President, CEO, and Editor-in-Chief, Forbes magazine

Top economist Gary Shilling shows you how to prosper in the slow-growing and deflationary times that lie ahead.

While many investors fear a rapid rise in inflation, author Gary Shilling, an award-winning economic forecaster, argues that the global economy is going through a long period of de-leveraging and weak growth, which makes deflation far more likely and a far greater threat to investors than inflation. Shilling explains in clear language and compelling logic why the U.S. and world economy will struggle for several more years and what investors can do to protect and grow their wealth in the difficult times ahead. The investment strategies that worked for last 25 years will not work in the next 10 years. Shilling advises readers to avoid broad exposure to stocks, real estate, and commodities and to focus on high-quality bonds, high-dividend stocks, and consumer staple and food stocks.
* Written by one of today's best forecasters of economic trends-twice voted by Institutional Investor as Wall Street's top economist
* Clearly explains what to invest in, what to avoid, and how to cope with a deflationary, slow-growth economy
* Demonstrates how Shilling has been consistently right about major economic trends since he began forecasting in the early 1980s

Filled with in-depth insights and practical advice, this timely guide lays out a convincing case for why investors need to be prepared for a long period of weak growth and deflation-not inflation-and what you can do to prosper in the difficult times ahead.

Chapter 5: The Results of Denial.

Chapter 7: No Help from Anywhere.

Chapter 10: The Outlook for Stocks.

Chapter 11: 12 Investments to Sell or Avoid.

Shilling, A. Gary
A. GARY SHILLING is President of A. Gary Shilling & Co., an economic consulting firm and a registered investment advisor. He has been a columnist for Forbes magazine since 1983, frequently appears on business news programs, and is quoted regularly in the print media. Shilling has been warning about the long-term threat of deflation for several years and has even created a board game, aptly titled The Deflation Game. He received his bachelor's degree from Amherst College and earned his master's degree and PhD in economics at Stanford University. Before establishing his own firm in 1978, Shilling was senior vice president and chief economist of White, Weld & Co., Inc. Earlier, he set up the Economics Department at Merrill Lynch, Pierce, Fenner & Smith and served as the firm's first chief economist.