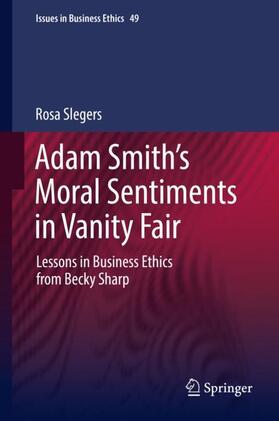 According to Adam Smith, vanity is a vice that contains a promise: a vain person is much more likely than a person with low self-esteem to accomplish great things. Problematic as it may be from a moral perspective, vanity makes a person more likely to succeed in business, politics and other public pursuits. “The great secret of education,” Smith writes, “is to direct vanity to proper objects:” this peculiar vice can serve as a stepping-stone to virtue. How can this transformation be accomplished and what might go wrong along the way? What exactly is vanity and how does it factor into our personal and professional lives, for better and for worse?

This book brings Smith’s Theory of Moral Sentiments into conversation with William Makepeace Thackeray’s Vanity Fair to offer an analysis of vanity and the objects (proper and otherwise) to which it may be directed. Leading the way through the literary case study presented here is Becky Sharp, the ambitious and cunning protagonist of Thackeray’s novel. Becky is joined by a number of other 19th Century literary heroines – drawn from the novels of Jane Austen, Charlotte Brontë and George Eliot – whose feminine (and feminist) perspectives complement Smith’s astute observations and complicate his account of vanity. The fictional characters featured in this volume enrich and deepen our understanding of Smith’s work and disclose parts of our own experience in a fresh way, revealing the dark and at times ridiculous aspects of life in Vanity Fair, today as in the past.

Introduction.- A profile of Becky Sharp.- Chapter 1 - To be quiet and very much interested.- Chapter 2 - Educating the martial spirit.- Chapter 3 - Ambition, the poor man's son, and the poor man's daughter.- Chapter 4 - The self-estimation and self-command of a mighty conqueror.- Chapter 5 - Partial and impartial spectators in Vanity Fair.- Chapter 6 - An industrious knave becomes respectable.- Conclusion.

Rosa Slegers is an Associate Professor of Philosophy at Babson College. She holds a PhD in Philosophy from Fordham University, an MBA from Babson College, and an MA in Literary Theory from the University of Leuven, Belgium.
Slegers' scholarship and teaching integrate philosophy, literature, and management thinking to pursue questions at the intersection of ethics and aesthetics. Her first book, Courageous Vulnerability (Brill, 2011), draws on the philosophies of William James, Henri Bergson, and Gabriel Marcel to frame a cluster of moral and aesthetic attitudes in Marcel Proust's In Search of Lost Time. Her second book, Adam Smith's Moral Sentiments in Vanity Fair (Springer, forthcoming), brings Smith's Theory of Moral Sentiments into conversation with 19th Century English novels to explore the role of vanity in commercial society. Slegers' current research focuses on the role of the emotions (in particular shame) in moral decision-making and the uncanny existential implications of technological developments.