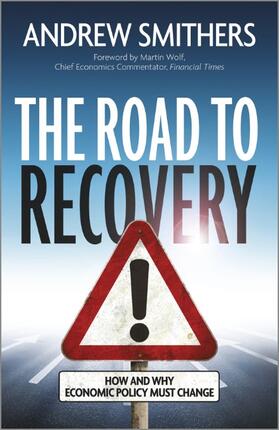 Smithers The Road to Recovery: How and Why Economic Policy Must Change

Smithers The Road to Recovery: How and Why Economic Policy Must Change

In The Road to Recovery, Andrew Smithers--one of a handful of respected economists to have accurately predicted the most recent global financial crisis--argues that the neoclassical consensus governing global economic decision-making must be revised in order to avoid the next financial collapse. He argues that the current low interest rates and budget deficits have prevented the recession becoming a depression but that those policies cannot be continuously repeated and a new consensus for action must be found. He offers practical guidance on reducing government, household, and business debt; changing the economic incentives for the management class that currently inhibit long-term growth; and rebalancing national economies both internally and externally. Further, he explains how central bankers must broaden the economic theories that guide their decisions to include the major factors of debt and asset prices.
* Offers practical, real-world economic policies for restructuring and rebalancing the global economic system
* Presents a modern economic theory for preventing the next collapse
* Ideal for economists, investors, fund managers, and central bankers
* Written by an economist described by the legendary Barton Biggs as "one of the five best, most dispassionate, erudite analysts in the world"

As the global economy continues the long climb out of recession, it's imperative that central bankers and other economic decision-makers not repeat the mistakes of the past. The Road to Recovery offers prescriptive guidance on redesigning an economic system that is healthy, stable, and beneficial to all.

Foreword ixChapter 1 Introduction 1Chapter 2 Why the Recovery Has Been So Weak 3Chapter 3 Alternative Explanations for Today's Low Business Investment and High Profit Margins 47Chapter 4 Forecasting Errors in the UK and the US 61Chapter 5 Cyclical or Structural: The Key Issue for Policy 69Chapter 6 The Particular Problem of Finance and Banking 81Chapter 7 Japan Has a Similar Problem with a Different Cause 107Chapter 8 The End of the Post-War Era 125Chapter 9 Misinformation as a Barrier to Sound Policy Decisions 149Chapter 10 Avoiding Future Financial Crises 169Chapter 11 The Current High Level of Risk 179Chapter 12 Inflation 195Chapter 13 Prospects Not Forecasts 219Chapter 14 Tackling the Bonus Culture 229Chapter 15 The Need for Change in Economic Theory and the Resistance to It 237Chapter 16 Summary and Conclusions 255Appendix 1 Mean Reversion of US Profit Margins 259Appendix 2 Goods' Output Requires Much More Capital Than Service Output 261Bibliography 263Acknowledgements 269Index 271

Smithers, Andrew
Andrew Smithers is Chairman of Smithers & Co. Ltd. and is a leading expert on financial economics and global asset allocation. His forty-five years' experience in international investment includes twenty-five years at SG Warburg & Co where, amongst other roles, he ran the investment management division, and over twenty years as head of his own investment consultancy firm, Smithers & Co, based in London. He is the co-author of three books on international finance: Valuing Wall Street, co-written with Stephen Wright, published in 2000; and Japan's Key Challenges for the 21st Century, co-written with David Asher, published in 1999. His book Wall Street Revalued - Imperfect Markets and Inept Central Bankers was published by John Wiley & Sons, Ltd. in July, 2009. He is also the author of Chapter 6, "Can We Identify Bubbles and Stabilize the System?" in The Future of Finance: The LSE Report, published by The London School of Economics and Political Science in September, 2010. Andrew is a Trustee of the Daiwa Anglo-Japanese Foundation, a Fellow of CFA (UK) and member of the Advisory Board for the Centre for International Macroeconomics and Finance (CIMF) at Cambridge University.As head of Smithers & Co., Andrew has helped pioneer the application of academic analysis of financial economics to investment management. He is well known for his work on valuing markets, including application of 'q', for his pioneering studies on the distorting impact of employee stock options on US profits, and for work on showing the understatement of Japanese published profits compared with US ones.www.smithers.co.uk