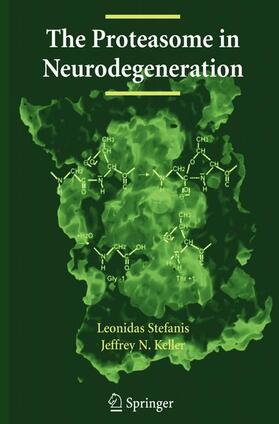 Stefanis / Keller The Proteasome in Neurodegeneration

Stefanis / Keller The Proteasome in Neurodegeneration

In the last 50 years a wealth of information has allowed us to understand the contribution of various regulatory factors that alter mRNA and protein s- thesis to a variety of physiological and pathological conditions. However, such regulation is only one of many factors that contribute to the levels of a given p- tein. One major factor that has been relatively obscure until recently has been the contribution of protein degradation to the regulation of the steady state level of protein expression and protein function. This rapidly evolving field has made a significant mark on the scientific community, as highlighted by the Award of the Nobel Prize in Chemistry for 2004 to Aaron Ciechanover, Avram Hershko and Irwin Rose for their pioneering work on the ubiquitin-proteasome system (UPS) of protein degradation, which is the subject of this volume. In recent years e- dence has been accumulating that suggests a role for UPS function in both ph- iological and pathological settings. In particular, studies have implicated a central role for the UPS in cell cycle regulation, cancer and neurodegeneration. Two points are however worth bearing in mind: First, ubiquitin’s function appears to extend far beyond the UPS and protein degradation; second, there are other important systems of intracellular protein degradation, most notably autophagic systems through the lysosomes, and these may also be involved in disease pat- physiology.

Basic Aspects of Protein Degradation Through the Ubiquitin Proteasome System (UPS).- Yeast Proteasome Structure and Biogenesis.- Ubiquitin-Proteasome System in the Central Nervous System.- Protein Aggregation, Inclusion Formation and Ups Function.- Protein Aggregation and the UPS: A Two-Way Street.- The Impact of Inclusion Formation on Cell Survival.- Inclusion Formation and Disolution Following Proteasomal Inhibition in Neuronal Cells.- Oxidative Stress and Ups Function.- The Proteasome: Source and a Target of Oxidative Stress?.- Inflammation as a Mediator of Oxidative Stress and UPS Dysfunction.- Proteasome and Neuronal Cell Death and Survival.- Role of the Ubiquitin Proteasome System During Neuronal Cell Death.- Pathways of Neuronal Cell Death Induced by Proteasomal Inhibition.- Models of Dysfunction of the UPS and the Proteasome.- Pharmacological and Molecular Models of Proteasomal Dysfunction.- The Gad Mouse: A Window Into UPS-Related Neurodegeneration and the Function of the Function of the Deubiquitinating Enzyme Uch-L1.- The UPS in Neurodegenerative Diseases and Aging.- Parkinson's Disease and Related Disorders.- Ubiquitination by Parkin - Implications in Parkinson's Disease.- The Ups in Neurodegenerative Diseases and Aging Huntington's Disease.- Frameshift Mutant Ubiquitin in Alzheimer's Disease and Other Neurodegenerative Disorders.- Motor Neuron Disease.- The Paradoxical Role of Proteasomes in Prion Disorders.- Aging and the Proteasome.