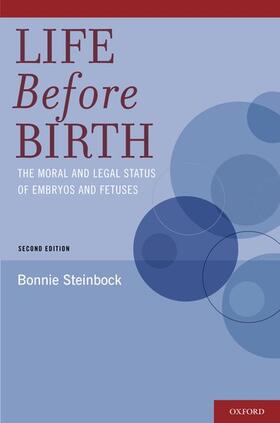 The Moral and Legal Status of Embryos and Fetuses

Life Before Birth provides a coherent framework for addressing bioethical issues in which the moral status of embryos and fetuses is relevant. It is based on the "interest view" which ascribes moral standing to beings with interests, and connects the possession of interests with the capacity for conscious awareness or sentience. The theoretical framework is applied to ethical and legal topics, including abortion, prenatal torts, wrongful life, the crime of feticide,
substance abuse by pregnant women, compulsory cesareans, assisted reproduction, and stem cell research. Along the way, difficult philosophical problems, such as identity and the non-identity problem are thoroughly explored. The book will be of interest not only to philosophers, but also physicians,
lawyers, policy makers, and anyone perplexed by the many difficulties surrounding the unborn.

"Steinbock's book is valuable for all interested in the ethical/legal issues surrounding abortion, prenatal injury and liability, maternal-fetal conflict, and fetal/embryo research. The author provides an excellent historical overview of these issues, but she also addresses the issues from the stance of a particular theory of moral status, namely, interest theory. This gives coherence to her discussion as well as allowing testing of the viability of interest theory."
—Choice

"A focused, lucid, analytically fine-grained discussion of a wide variety of problems. extremely useful as a survey of the current state of the debate." —Religious Studies Review

"Merits serious consideration by physicians. Steinbock's interests-based approach treats all questions as open — another and most welcome breath of fresh air." -New England Journal of Medicine

"An extremely valuable contribution to the literature. The author carefully identifies the many bioethical issues to which the status of embryos and fetuses is relevant.She thoroughly reviews the extensive medical, bioethical, and legal literature on all of these issues, offering well-developed critiques of many standard positions. She articulates and thoughtfully defends interesting positions on all of theses topics. Anyone with an interest in these issues will learn a great deal from her
knowledgeable and judicious treatment of them." — The Journal of Clinical Ethics

Steinbock, Bonnie
Bonnie Steinbock received her Ph.D. in Philosophy from the University of California, Berkeley, in 1974. She began teaching philosophy at the College of Wooster, and moved to the University at Albany in 1977. Her area of specialization is bioethics, particularly reproduction and genetics.