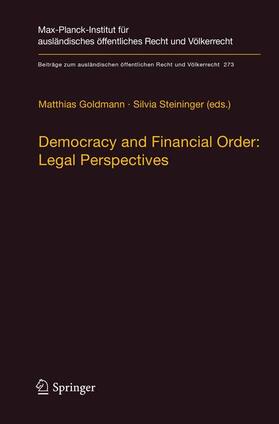 This book discusses the relationship between democracy and the financial order from various legal perspectives. Each of the nine contributions adopts a unique perspective on the legal and political challenges brought to the fore by the Global Financial Crisis. This crisis and the ensuing sovereign debt crisis in Europe are only the latest in a long series of financial crises around the globe in recent decades. By their very existence, but also as a result of the political turmoil they have created, these financial crises testify to the well-known tensions between democracy and a market-based economic and financial order. However, what is missing in this debate is an analysis of the role of law for reconciling democracy with a market-based financial order.
To fill this lacuna, the book focuses on the controversy surrounding the concept of law, thereby adding another variable to the debate on the relation between democracy and capitalism. Each chapter addresses the concept of law from a particular theoretical angle, be it a full-grown legal theory or an approach in political economy that has a particular view of the law.

Introduction: Democracy and Financial Order - Legal Perspectives by Matthias Goldmann and Silvia Steininger.- A Discourse Theoretical Approach to Sovereign Debt Restructuring: Towards a Democratic Financial Order by Matthias Goldmann and Silvia Steininger.- The Limits of Law (and Democracy) in the Euro Crisis: An Approach from Systems Theory by Lars Viellechner.- Rational Choice and Its Limits by Emanuel V. Towfigh.- Constitutional and Administrative Pluralism in the EU System of Banking Supervision by Matej Avbelj.- Debt, Default, and Two Liberal Theories of Justice by Oisin Suttle.- The Financial Crisis as a Crisis of Democracy: Towards Prudential Regulation through Public Reasoning by Matthias Goldmann.- Neoliberalism and Law: The Case of the Constitutional Balanced-Budget Amendment by Thomas Biebricher.- An Alert from the Left: The Endangered Connection Between Taxes and Solidarity at the Local and Global Levels by Francisco Saffie G.- Public Law's Rationalization of the Legal Architecture of Money: What Might Legal Analysis of Money Become? by Isabel Feichtner.