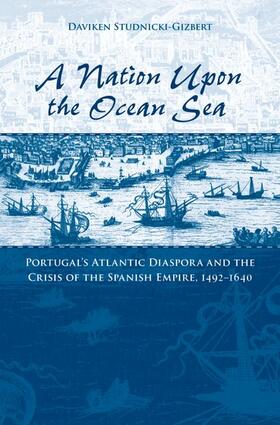 Studnicki-Gizbert A Nation upon the Ocean Sea

Portugal's Atlantic Diaspora and the Crisis of the Spanish Empire, 1492-1640

Studnicki-Gizbert A Nation upon the Ocean Sea

With the opening of sea routes in the fifteenth century, groups of men and women left Portugal to establish themselves across the ports and cities of the Atlantic or Ocean Sea. They were refugees and migrants, traders and mariners, Jews, Catholics, and the Marranos of mixed Judaic-Catholic culture. They formed a diasporic community known by contemporaries as the Portuguese Nation. By the early seventeenth century, this nation without a state had created a
remarkable trading network that spanned the Atlantic, reached into the Indian Ocean and Asia, and generated millions of pesos that were used to bankroll the Spanish empire. A Nation Upon The Ocean Sea traces the story of the Portuguese Nation from its emergence in the late fifteenth century to its
fragmentation in the middle of the seventeenth and situates it in relation to the parallel expansion and crisis of Spanish imperial dominion in the Atlantic. Against the backdrop of this relationship, the book reconstitutes the rich inner life of a community based on movement, maritime trade, and cultural hybridity. We are introduced to mariners and traders in such disparate places as Lima, Seville and Amsterdam, their day-to-day interactions and understandings, their houses and domestic
relations, their private reflections and public arguments.
This finely-textured account reveals how the Portuguese Nation created a cohesive and meaningful community despite the mobility and dispersion of its members; how its forms of sociability fed into the development of robust transatlantic commercial networks; and how the day-to-day experience of trade was translated into the sphere of Spanish imperial politics as merchants of the Portuguese Nation took up the pen to advocate a program of commercial reform based on religious-ethnic toleration and
the liberalization of trade.
A microhistory, A Nation Upon The Ocean Sea contributes to our understanding of the broader histories of capitalism, empire, and diaspora in the early Atlantic.