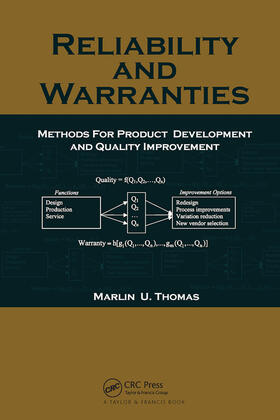 Our modern view of quality is a multifaceted conglomeration of probability, planning, and perception. Although warranties are important first as an estimate and then as a measurement of reliability, most books on reliability and quality relegate the topic of warranties to a single chapter. Today’s engineering student needs an integrated view that considers all aspects that contribute to overall quality along with methods to analyze, predict, measure, and improve each component. Reliability and Warranties: Methods for Product Development and Quality Improvement provides this unified treatment along with illustrative examples, end-of-chapter problems, and background material. Based on the author’s distinguished experience as a practicing engineer and educator, this text supplies students with a modern education in quality engineering and the skills and knowledge necessary to succeed in the real world. It begins with preliminary results for dealing with failures followed by the modern definition and view of quality, various types and models for warranties, quality improvement, and perspective for achieving reliability and quality goals. It also includes a unique framework for measuring and tracking overall quality performance. Ideal for senior undergraduate and first-year graduate students taking courses on quality, reliability, or industrial engineering, Reliability and Warranties presents a practical, thoroughly integrated path to meeting both engineering and customer quality goals.

Thomas, Marlin U.
Marlin U. Thomas, Ph.D., is dean, Graduate School of Engineering and Management at the Air Force Institute of Technology. Prior to joining AFIT he was professor and head of the School of Industrial Engineering at Purdue University where he had also served as director of the Institute for Interdisciplinary Engineering Studies. He received his B.S.E. (1967) from the University of Michigan Dearborn, and M.S.E. (1968) and Ph.D. (1971) in industrial engineering from the University of Michigan. He has been a registered professional engineer since 1970, with engineering R&D and product development experience with Owens-Illinois, Inc., and as a manager of vehicle reliability planning and analysis with Chrysler Corporation, where he first became interested in developing quantitative methods for analyzing warranties. He also has served as a program director for the National Science Foundation working in operations research and production systems., Dr. Thomas' teaching and research areas include stochastic modeling, reliability, and logistics systems, with emphasis on contingency operations. He has received several awards for his professional accomplishments, including the Frank Groseclose Medallion Award (for his notable impact on the industrial engineering profession) and the Albert G. Holzman Distinguished Educator Award from the Institute of Industrial Engineers. He has authored or co-authored over 60 articles and technical papers that have appeared in publications such as IIE Transactions, Operations Research, Management Science, IEEE Transactions on Reliability, and he has delivered over 100 presentations and lectures at major conferences and universities., Dr. Thomas has held the position of president of the Institute of Industrial Engineers; department editor, IIE Transactions; area editor, Operations Research; and was a member of the Army Science Board. He is a member of the American Society for Engineering Education and American Indian Science and Engineering Societ