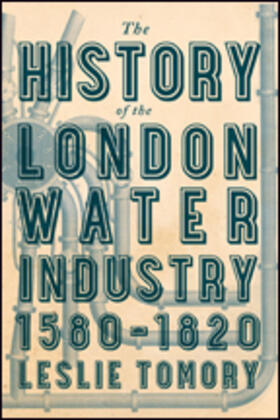 How did pre-industrial London build the biggest water supply industry on earth?

Beginning in 1580, a number of competing London companies sold water directly to consumers through a large network of wooden mains in the expanding metropolis. This new water industry flourished throughout the 1600s, eventually expanding to serve tens of thousands of homes. By the late eighteenth century, more than 80 percent of the city’s houses had water connections—making London the best-served metropolis in the world while demonstrating that it was legally, commercially, and technologically possible to run an infrastructure network within the largest city on earth.

In this richly detailed book, historian Leslie Tomory shows how new technologies imported from the Continent, including waterwheel-driven piston pumps, spurred the rapid growth of London’s water industry. The business was further sustained by an explosion in consumer demand, particularly in the city’s wealthy West End. Meanwhile, several key local innovations reshaped the industry by enlarging the size of the supply network. By 1800, the success of London’s water industry made it a model for other cities in Europe and beyond as they began to build their own water networks. The city’s water infrastructure even inspired builders of other large-scale urban projects, including gas and sewage supply networks.

The History of the London Water Industry, 1580–1820 explores the technological, cultural, and mercantile factors that created and sustained this remarkable industry. Tomory examines how the joint-stock form became popular with water companies, providing a stable legal structure that allowed for expansion. He also explains how the roots of the London water industry’s divergence from the Continent and even from other British cities was rooted both in the size of London as a market and in the late seventeenth-century consumer revolution. This fascinating and unique study of essential utilities in the early modern period will interest business historians and historians of science and technology alike.

Tomory, Leslie
Leslie Tomory is a research affiliate at McGill University. He is the author of Progressive Enlightenment: The Origins of the Gaslight Industry, 1780–1820.