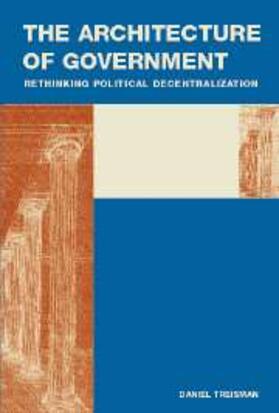 Treisman The Architecture of Government

Treisman The Architecture of Government

Since the days of Montesquieu and Jefferson, political decentralization has been seen as a force for better government and economic performance. It is thought to bring government 'closer to the people', nurture civic virtue, protect liberty, exploit local information, stimulate policy innovation, and alleviate ethnic tensions. Inspired by such arguments, and generously funded by the major development agencies, countries across the globe have been racing to devolve power to local governments. This book re-examines the arguments that underlie the modern faith in decentralization. Using logical analysis and formal modeling, and appealing to numerous examples, it shows that most are based on vague intuitions or partial views that do not withstand scrutiny. A review of empirical studies of decentralization finds these as inconclusive and mutually contradictory as the theories they set out to test.

Treisman, Daniel
Daniel Treisman is Professor of Political Science at the University of California, Los Angeles. He is the author of After the Deluge: Regional Crises and Political Consolidation in Russia (1999), and (with Andrei Shleifer) Without a Map: Political Tactics and Economic Reform in Russia (2000). A recipient of fellowships from the John Simon Guggenheim Foundation, the German Marshall Fund of the United States, the Hoover Institution, and the Smith Richardson Foundation, he has published broadly in academic journals including the American Political Science Review, the American Economic Review, the British Journal of Political Science, and World Politics, as well as policy journals such as Foreign Affairs and Foreign Policy. In 2007–8, Treisman will serve as Lead Editor of the American Political Science Review.