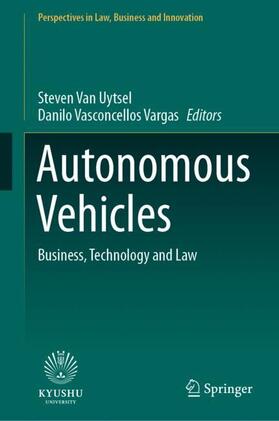 In this volume, the authors form a multidisciplinary team of experts to discuss some of the reasons behind this delay. The focus is on three areas: business, technology, and law. The authors discuss how the traditional car manufacturers have to devote numerous resources to the development of a new business model, in which the sole manufacturing of vehicles may no longer be sufficient. In addition, the book seeks to introduce how technological challenges are creating a shift toward connected autonomous vehicles. Further, it provides insight into how regulators are responding to the insufficiently tested technology and how lawyers try to answer the liability question for accidents with these autonomous vehicles.

Vasconcellos Vargas, Danilo
Steven Van Uytsel is an associate professor of competition law at the Faculty of Law, Kyushu University, Fukuoka, Japan. His specialization in competition law relates to enforcement issues and the position of competition law in countries in transition. More recently, he has been focusing on algorithmic pricing strategies and competition law, for which he is the recipient of the Grant in Aid for Scientific Research (C), No. 18K01300 (April 2018-March 2021), "Artificial Intelligence, Price Setting Strategies and Antitrust Law: Towards a Regulatory Framework." He has also developed an interest in the regulation of artificial intelligence for autonomous vehicles, for which he has been granted a Tsubasa research grant from Kyushu University. He is the author of, amongst others, "Adversarial Machine Learning: A Blow to the Transportation Sharing Economy", in Legal Tech and the New Sharing Economy, Corrales Compagnucci et al.,  eds. (Springer, 2020);  "Artificial Intelligence and Collusion: A Literature Overview", in Robotics, AI, and the Future of Law, Fenwick, Corrales, and Forgó, eds., (Springer, 2019); and "Digital Markets and the Response of the Japan Fair Trade Commission: The DeNA Co. Case", in Competition Law for the Digital Economy, Lundqvist, ed. (Edward Elgar, 2020).Danilo Vasconcellos Vargas is an associate professor at Kyushu University, Japan. His research interests span artificial intelligence (AI), evolutionary computation, complex adaptive systems, interdisciplinary studies involving or using an AI's perspective, and AI applications. Many of his works have been published in prestigious journals such as Evolutionary Computation (MIT Press), IEEE Transactions on Evolutionary Computation and IEEE Transactions of Neural Networks and Learning Systems with press coverage in news magazines such as BBC news. His awards include the IEEE Excellent Student Award and scholarships to study in Germany and Japan for a number of years. Regarding his community activities, he was the presenter of two tutorials at the renowned GECCO conference. He was also co-organizer and advisor for the committees of various workshops about both AI and multidisciplinary perspectives about AI with more than six invited talks, one of which was given in a workshop in CVPR 2019. Currently, he leads the Laboratory of Intelligent Systems aimed at building a new age of robust and adaptive artificial intelligence. More information can be found both on his website, http://danilovargas.org and his lab page, http://lis.inf.kyushu-u.ac.jp.