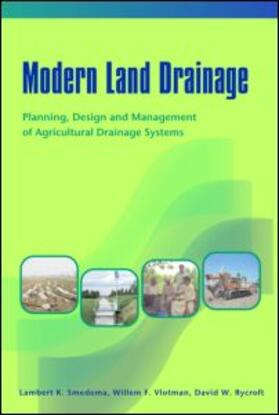 Fully renewed and extended, this edition is a valuable source of information for anyone involved in drainage engineering and management. It provides new theories, technologies, knowledge and experiences in combination with traditional land development practices in the humid temperature zone. Aspects covered include:management and maintenance; drainage application and design; and adverse impacts on the environment. Intended as both a handbook and a textbook, this work is of particular value to university students as well as professionals within drainage development, engineering and management.

Table of Contents
PART I INTRODUCTION.1
1 LAND DRAINAGE FOR AGRICULTURE.1

Smedema, L.K.
LAMBERT K SMEDEMA worked for most of his career for Euroconsult on irrigation in Africa and South America and on drainage in the Middle East and Asia. He was a lecturer/researcher at the University of Nairobi and at the Delft University of Technology. During the nineties, he worked as a consultant with the World Bank and with the Food and Agriculture Organization of the United Nations. Lambert Smedema is currently working as an independent consultant.
WILLEM F VLOTMAN has worked both with consultants and research organisations throughout his professional career. Since November 2004, he has been working for Sinclair Knight Merz (SKM) consultants, in Tatura, Australia as Senior Irrigation and Drainage Specialist. Dr. Vlotman has worked widely internationally and written numerous publications. He is chairman of the Working Group on Drainage of the International Commission on Irrigation and Drainage (ICID).
DAVID W RYCROFT began his professional career working for the UK Ministry of Agriculture at their Field Drainage Experimental Unit based in Cambridge. He subsequently joined consultants Sir M MacDonald and Partners and worked as a salinity control and land drainage specialist on large irrigation projects in Iraq, Somalia and Egypt. In 1979, David Rycroft joined the Institute of Irrigation Studies (Southampton University) to teach in combination with his overseas consultancy work.