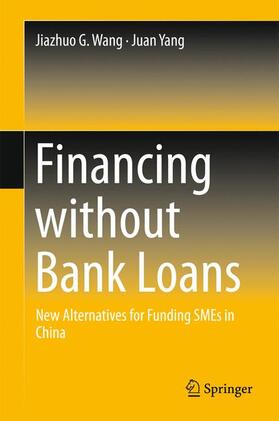 This book covers all important financial innovations for SME financing, and combines theoretical analysis and real world practices employed in China’s financial market. As China is increasingly becoming a key player in the global economy, the book helps readers gain a better understanding of the current structure and operation of, as well as future changes in, the Chinese economy. Given the high likelihood of RMB joining the IMF’s SDR in the near future, this book offers a well-timed publication that will prove valuable for a broad readership, either as a reference book or as a guide to understanding, researching, teaching on and making business decisions about China and related issues.

Wang, Jiazhuo G.
Jiazhuo G. Wang is a finance professor of School of Business, College of Staten Island, City University of New York, and a visiting professor of HSBC School of Business at Peking University (PKU) and a senior research fellow at SME Research Center at PKU. He is the co-author of the book "Who Gets Funds from China's Capital Market", published by Springer in 1/2014, and author or editor of several other in-writing business/finance books that will be published by Springer and Qinghua University Publisher in the next a few months. Dr. Wang has been an invited author for G7/G20 Think Tank, invited guest for business dialogue hosted by China Radio International, keynote speaker at SME Forum of 2015 China Internet Association Annual Conference and many other events, and moderator of dialogue with former US president Bill Clinton, former Germany president Christian Wulff, former prime minister of France J.P Raffarin, former South Korea president Ming-bak Lee, and former secretary general of United Nations Kofi Annan.