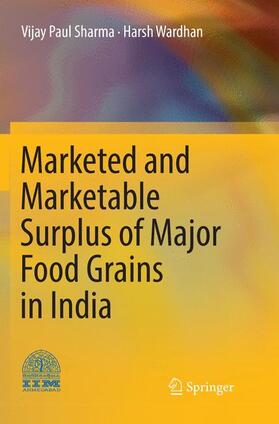 This book helps readers understand the concepts of marketed and marketable surplus, as well as the role of the government and marketing agencies, including those in the private sector, in improving market efficiency. It also examines the impact of various socioeconomic, technological, institutional, infrastructure, and price factors on the marketed surplus of major crops. While Indian agriculture has become increasingly market-oriented and monetized, the importance of market orientation of agriculture is also being recognized at the international level. The proportion of agricultural production that is marketed by farmers has increased significantly over the last few decades in India: in the early 1950s, about 30–35 per cent of food grains output was marketed, which has now increased to more than 70 per cent. In this context, the marketed surplus is proportionately higher in the case of commercial crops than subsistence crops.

Recognizing its importance, the Government of India initiated a nation-wide survey to estimate marketable surplus and post-harvest losses in the early 1970s, which continued up to the late 1990s. As Indian agriculture, has undergone significant transformation, and no reliable estimates of marketed and marketable surplus are available, the study was conducted to estimate the marketed and marketable surplus of major food crops in leading producing states, and to examine important factors which determine the level of marketed surplus for various categories of farms.

The results of this study offer a valuable resource for designing effective food procurement, distribution and price policies. Further, they provide reliable estimates of household farm retention pattern for self-consumption, seed, feed, wages and other payments in kind, which can be used as the basis for planning infrastructure development of storage and distribution. This essential information can help policy-makers determine how much marketed surplus is generated by the different categories of farmers and how marketable surplus would respond to changes in diverse economic and non-economic variables, allowing them to design policies accordingly.

Wardhan, Harsh
Professor Vijay Paul Sharma is currently Chairman, Commission for Agricultural Costs and Prices (CACP), Ministry of Agriculture and Farmers Welfare, Government of India. He was a Professor in the Centre for Management in Agriculture (CMA), Indian Institute of Management, Ahmedabad (IIMA) when this study was completed. He has held several important positions including Chairman, Centre for Management in Agriculture (CMA) during 2005-2008 and 2010-2012 and Chairman, Post Graduate Programme (equivalent to MBA) in Food and Agribusiness Management (PGP-FABM) from 2002 to 2004 and 2013 to 2015 at the IIMA. He was an International Consultant to the Food and Agriculture Organization of the United Nations (FAO), FAO Regional Office for Near East and North Africa, in Riyadh, Saudi Arabia during October 2015 to January 2016 and Advisor to USAID's (The United States Agency for International Development's) Economic Reforms Project in the Central Asian Countries in Tashkent, Uzbekistan in 2005. He has been a consultant to many national and international organisations in the agrifood and development sector and is a Member/Chairman of several national and state-level committees. His research and consulting interests focus on agricultural and food policies, international trade issues including the World Trade Organization (WTO), agribusiness competitiveness and strategic planning, pricing policy, subsidies, rural infrastructure, and food safety and quality issues. He teaches courses on agricultural and food policy, international trade and commodity trading. Harsh Wardhan, presently working as a consultant in the Ministry of Commerce & Industry, Government of India, was a Research/Academic Associate at the Indian Institute of Management, Ahmedabad. He has completed his Master's degree in Economics from the Ambedkar University, Delhi and Bachelor's degree in Economics from the Kirori Mal College, Delhi University. A University Grants Commission-Junior Research Fellowship (UGC-JRF) holder, he has a keen sense for both qualitative and quantitative techniques of economics research.