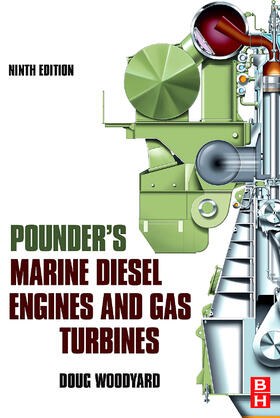 Since its first appearance in 1950, Pounder's Marine Diesel Engines has served seagoing engineers, students of the Certificates of Competency examinations and the marine engineering industry throughout the world. Each new edition has noted the changes in engine design and the influence of new technology and economic needs on the marine diesel engine.
Now in its ninth edition, Pounder's retains the directness of approach and attention to essential detail that characterized its predecessors. There are new chapters on monitoring control and HiMSEN engines as well as information on developments in electronic-controlled fuel injection. It is fully updated to cover new legislation including that on emissions and provides details on enhancing overall efficiency and cutting CO2 emissions.
After experience as a seagoing engineer with the British India Steam Navigation Company, Doug Woodyard held editorial positions with the Institution of Mechanical Engineers and the Institute of Marine Engineers. He subsequently edited The Motor Ship journal for eight years before becoming a freelance editor specializing in shipping, shipbuilding and marine engineering. He is currently technical editor of Marine Propulsion and Auxiliary Machinery, a contributing editor to Speed at Sea, Shipping World and Shipbuilder and a technical press consultant to Rolls-Royce Commercial Marine.