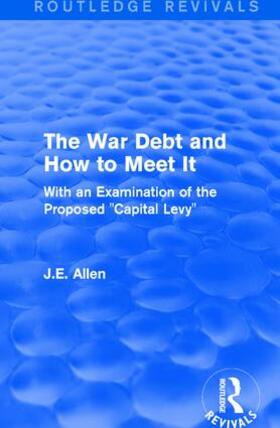 Allen Routledge Revivals: The War Debt and How to Meet It (1919)

With an Examination of the Proposed "Capital Levy"

Allen Routledge Revivals: The War Debt and How to Meet It (1919)

First published in 1919, this book traces the growth of War Debt during the First World War, examines the real meaning of the Debt and discusses the proposals for clearing it. As the chief contemporary proposal put forward for meeting the interest and repaying the principal of the Debt was the "Conscription of Wealth", or the "Capital Levy", this provides a main focus for the analysis. The author also examines whether the methods of financing war — by borrowing the required money — is sound and whether it should be replaced by taxation. A plan for the reform of income tax is put forward, designed to yield two-thirds of the revenue needed for a Peace Budget that also addresses the War Debt.