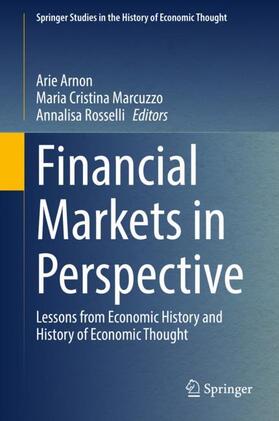 Lessons from Economic History and History of Economic Thought

This book examines financial markets from a historical perspective. Bringing together contributions from leading historians of economic thought, economists and economic historians, it offers an integrated approach and reflects on the workings of financial markets, their impact on and relation with the rest of the economy and how their role was and is understood by economics. The contributions cover topics such as classical and modern economic thinking on financial markets and institutions, as well as financial models and innovations, and also present case studies on financial history and on policy issues. The historical perspective leads to a representation of markets not as abstract and timeless mechanisms but as institutions populated by a diversity of agents, subject to rules and customs, and influenced by scientific developments and economic theories.

Introduction.- Part I: Guggenheim Prize Lecture.- The Myth of Money as a Veil.- Part II: Financial History.- British Investment Trusts 1868 to 1928: Portfolio Diversification and the Beginnings of Institutional Investment.- Early Reflections on the Democratization of Organized Markets and Their Regulations.- Keynes as Trader in Commodity Futures.- High-Frequency Trading and the Material Political Economy of Finance.- Part III: Lessons from History and Great Economists.- Marx and Hayek on "Real" Versus "Less Real": Explanations for the Fragility of Capitalism.- Financial Instability and Crises in Keynes's Monetary Thought.- Debt and Debt Management: Reflections on a Fable by Kalecki.- Part IV: Income Distribution and the Social Roots of Economic Crisis.- Desperation by Consent: Inequality and Financial Crises.- Inequality, Economic Policy and Household Credit in the US: The Roots of Unsustainable Finance.- Profitability, Stimulus Policy and Finance.- Part V: Today's Macroeconomics Confronts Economic Crises.- Some Reflections on Financial Instability in Macro Agents-Based Models: Genealogy and Objectives.- Financial Instability and Frictions: Can DSGE Models Finally Address the Critical Issues?.- Instability and Structural Dynamics in the Macroeconomy: A Policy Framework.

Arnon, Arie
Arie Arnon is a Professor Emeritus of Economics at Ben Gurion University (Israel). He works mainly in the field of history of economic thought, covering monetary theory and macroeconomics. His publications include "Thomas Tooke: Pioneer of Monetary Theory" (1991), and "Monetary Theory and Policy from Hume and Smith to Wicksell: Money, Credit and the Economy", (2011), which received the Best Book Award from the ESHET - the European Society for the History of Economic Thought - in 2012. Maria Cristina Marcuzzo is a Honorary Professor of Economics at the University of Rome, "La Sapienza" (Italy), Foreign Secretary of the Academy of Lincei and former President of the European Society for the History of Economic Thought and the Society for the History of Political Economy. Her interests include classical monetary theory, the Cambridge school of economics and Keynesian economics.