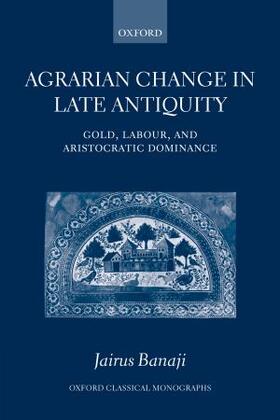 The economy of the late antique Mediterranean is still largely seen through the prism of Weber's influential essay of 1896. Rejecting that orthodoxy, Jairus Banaji argues that the late empire saw substantial economic and social change, propelled by the powerful stimulus of a stable gold coinage that circulated widely. In successive chapters Banaji adduces fresh evidence for the prosperity of the late Roman countryside, the expanding circulation of gold, the
restructuring of agrarian élites, and the extensive use of paid labour, above all in the period spanning the fifth to seventh centuries. The papyrological evidence is scrutinized in detail to show that a key development entailed the rise of a new aristocracy whose estates were immune to the devastating
fragmentation of partible inheritance, extensively irrigated, and responsive to market opportunities. A concluding chapter defines the more general issue raised by the aristocracy's involvement in the monetary and business economy of the period.

Exploiting a wide range of sources, Agrarian Change in Late Antiquity weaves together different strands of historiography (Weber, Mickwitz, papyrology, agrarian history) into a fascinating interpretation that challenges the minimalist orthodoxies about late antiquity and the ancient economy more generally.