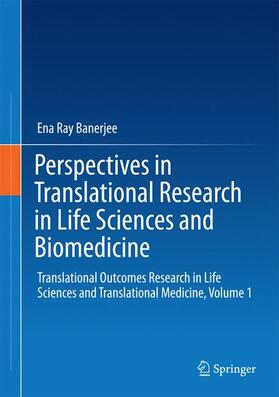 Banerjee Perspectives in Translational Research in Life Sciences and Biomedicine

Banerjee Perspectives in Translational Research in Life Sciences and Biomedicine

The present book addresses the multi-disciplinary nature of Translational Outcomes Research, which is a watershed for nearly all the disciplines of Life and Health Sciences, along with the Materials Sciences including but not limited to Zoology, Botany, Microbiology, Biochemistry, Physiology, Nanotechnology, the Medical Sciences, Bioengineering, Biophysics, Medicinal Chemistry, Structural Biology, Biostatistics and Bioinformatics. This book, for the first time, addresses the basic premises of fundamental research in facilitating drug discovery. One chapter is dedicated to a novel generation of platforms with novel camelid antibodies and their technological extensions, while another focuses on functional food and nutraceuticals. The book begins with a thorough overview of what translational outcomes research connotes and what the current status of research in the area is, and goes on to elucidate various pertinent preclinical disease models and their uses in basic and application based research in the Life Sciences. How basic approaches to screening and characterization vis-à-vis their role in amelioration of the two cardinal problems of inflammation and degeneration involved in most diseases is elucidated. The book ends with a discussion of the relevance and importance of using Bio Green technology in Translational Outcomes, addressing the need to fill the gap between academia and industry and clinics that can arise through direct or indirect collaboration between the stakeholders and emphasizing the need for an eco-friendly approach so as not to jeopardize the fine balance that holds life on earth in harmony.

Chapter 1. Translational Research in Life Sciences.- Chapter 2. Preclinical disease models as a platform for drug discovery.- Chapter 3. Novel antibodies as a replacement for antibiotics.- Chapter 4. Functional Food and Nutraceuticals.- Chapter 5. Bio-Green-Technology as a multi-disciplinary interface amongst the Life Sciences.

Banerjee, Ena Ray
Dr. Ena Ray Banerjee is an Associate Professor of Zoology at the University of Calcutta, India and an alumnus of the premiere educational institutions Lady Brabourne College and Gokhale Memorial Girls' school. She was trained in immunobiology during her PhD and worked extensively in immune modulation in inflammation in general and cytokine mediated inflammation in particular. Having taught both under- and post-graduate Zoology for several years as a lecturer at the University of Calcutta, India, she pursued her post-doctoral studies as a visiting scientist and subsequently faculty member of the University of Washington School of Medicine, Seattle, USA. There she began with immunological studies defining key molecules in inflammation and eventually super-specialized into lung inflammation particularly allergies and made a natural transition into regenerative medicine of the lung, having worked with one of the foremost scientists in stem cell biology, Professor Thalia Papayannopoulou and a renowned allergist Dr. William R. Henderson, Jr. Her work pioneered tissue engineering of lung lineage specific cells of the non-ciliated variety from human embryonic stem cells and identified stem cell niches in the mouse lung. She later returned to India and worked for a time at a drug discovery company Advinus Therapeutics, a TATA enterprise, where she led in vitro and in vivo efforts in pharmacological molecules, drug discovery in asthma and related respiratory illness, and then returned to academics as a Reader at her alma mater, the renowned University of Calcutta. Her group's work focuses on drug discovery efforts using novel drugs (small molecules), herbal extracts (functional food), probiotics (nutraceuticals), novel antibody-mediated (camelid antibody) and cells (tissue engineering of stem cells of embryonic origin, adult tissue origin and umbilical cord-derived) in inflammatory disease models (tissue-specific inflammation in the lung and systemic inflammation) and degenerative disease models. She has published extensively in premiere scientific journals and her publications are widely cited in "methods" volumes as well as "drug discovery" websites and portals.