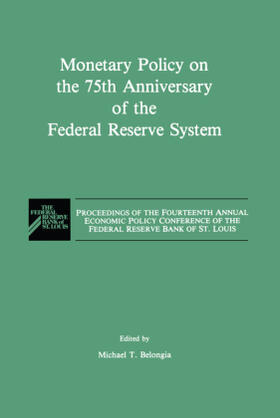 Proceedings of the Fourteenth Annual Economic Policy Conference of the Federal Reserve Bank of St. Louis

When the 12 District Banks of the Federal Reserve System opened their doors for business on November 16, 1914, few observers could have foreseen the Fed's present role as a major, if not dominant, player in U. S. and world economic policymaking. After all, two previous attempts to create a central bank in this country had ended in failure. Moreover, much of the economic theory and institutional structure that have given rise to monetary policy's influence in recent years were not yet in place. Indeed, it would take the Fed more than 20 years to learn (by accident!) the power of open market operations. Clearly, the modern Federal Reserve System has found itself with powers and responsibilities that were not envisioned by its founders. These proceedings from a conference held at the Federal Reserve Bank of St. Louis on October 19-20, 1989, examine U. S. monetary policy from a variety of perspectives: a historical review of how it has affected aggregate economic performance; a positive analysis of why the Federal Reserve has chosen particular policy strategies; a review of normative arguments about what the Fed should pursue as its policy objective; a critique of how the Fed's "output"-the flow of monetary services in the U. S. economy-is measured; and, finally, a debate over the Fed's ability to influence real economic activity by changing the nominal quantity of money in circulation.