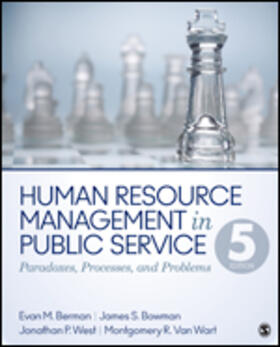 Recognizing the inherent tensions and contradictions that result from managing people in organizations, Human Resource Management in Public Service: Paradoxes, Processes, and Problems offers provocative and thorough coverage of the complex issues of management in the public sector. Continuing the award-winning tradition of previous editions, this Fifth Edition helps students to understand complex managerial puzzles and covers all of the stages of the employment process, including recruitment, selection, training, legal rights and responsibilities, compensation, and appraisal.

-
Extensive skill-building exercises help you practice and apply the material and develop hands-on, technical skills that will help you in the workplace.


-
A broad range of examples from local, state, federal, and international settings provide you with examples of the issues in a variety of public sector contexts.


-
Questions at the end of each chapter, along with a mix of individual, group, and in-class exercises, encourage active learning and mastery of concepts.

Berman, Evan M.
Evan M. Berman is Professor of Public Management and Director of Internationalization at Victoria University of Wellington, School of Government. Prior, he was the Huey McElveen Distinguished Professor at Louisiana State University. His areas of expertise are human resource management, public performance, local government, and public governance in Asia. He is past Chair of the American Society for Public Administration’s Section of Personnel and Labor Relations. He has over 125 publications and 12 books, including People Skills At Work (CRC Press, 2011), Essential Statistics for Public Managers and Policy Analysts, Third Edition (CQ Press, 2012), and a trilogy of books on Public Administration in Asia (2010, 2011, 2013, CRC Press). He has published in all major journals of the discipline, is Senior Editor of Public Performance & Management Review, a Distinguished Fulbright Scholar, past University Chair Professor at National Chengchi University (Taipei, Taiwan), and a former policy analyst with the National Science Foundation.

Bowman, James S.
James S. Bowman is a professor of public administration at the Askew School of Public Administration and Policy, Florida State University. Noted for this work in ethics and human resource management, Dr. Bowman is author of over 100 journal articles and book chapters, as well as editor of six anthologies. He is co-author of The Professional Edge: Competencies in Public Service (2nd ed., Sharpe, 2010) and Public Service Ethics: Individual and Institutional Responsibilities (CQ Press, 2015). For nearly two decades, he served as editor-in-chief of Public Integrity, a journal owned by the American Society for Public Administration. A past National Association of Schools of Public Affairs and Administration Fellow, as well as a Kellogg Foundation Fellow, he has experience in the military, civil service, and business.

West, Jonathan P.
Jonathan P. West is a professor and chair of political science and director of the graduate public administration program at the University of Miami. His research interests include ethics, public administration, and human resource management. He has published over 100 peer-reviewed articles and book chapters as well as nine books. He is co-author of Public Service Ethics: Individual and Institutional Perspectives (CQ Press, 2015) American Politics and the Environment (2nd. Ed., SUNY Press, 2015) and The Professional Edge: Competencies in Public Service (2nd ed., Sharpe, 2010.) For nearly two decades he has been managing editor of the Public Integrity journal. He served as a Captain in the U.S. Army as a management analyst in the Office of the Surgeon General.

Van Wart, Montgomery R.
Montgomery Van Wart is a professor at California State University San Bernardino and a visiting professor at the University of Hong Kong. His publications include nine books and a substantial number of articles in the leading journals in his field. His most recent book is Leadership and Culture: Comparative Models of Top Civil Servant Training, with Hondeghem and Schwella (Palgrave Macmillan, 2015). His research areas are administrative leadership, human resource management, training and development, administrative values and ethics, organization behavior, and general management. He also serves on numerous editorial boards and as the Associate Editor for Public Productivity & Management Review. As an instructor, he has spent as much time teaching and facilitating programs for executives and managers in public agencies as he has teaching graduate students. His training programs have been for individuals in all levels of government in the United States and executives and elected officials from foreign countries.