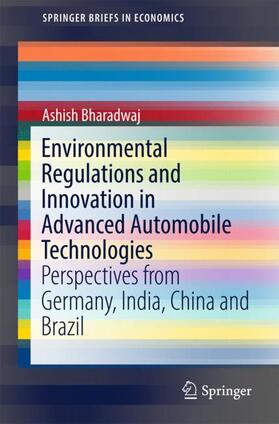 The book examines innovation in environment-friendly technologies in the automobile industry. The focus of the book are Germany (a technology leader in the global automobile industry), on the one hand, and India, China and Brazil (technologically proficient emerging technology leaders) on the other hand. Patents have been used as a metric to measure and understand innovation. The book traces the evolution of regulatory standards in the automobile industry, relies on a unique patent dataset, and draws on a number of interviews conducted with regulators and engineers to get a better picture of how environmental policies and standards, including emission norms and fuel requirements, have developed overtime and now the industry has responded. The book’s core argument is that technological innovation is what has driven the industry in the past 125 years, but, at the same time, the industry has created problems and faced controversies with regard to its path dependency on carbon-intensive technologies. As a result, we have witnessed growing role of environmental regulators in ensuring that the growth path of the automobile industry, a powerhouse of growth of several economies, is aligned with the larger goals of addressing climate change and energy concerns. Against the backdrop of the emergence of Brazil, China and India in the global economy, the book focuses on the developments in these three countries, and draws parallels with Germany, which benefited from first mover advantage in technology and a substantial head-start in implementing cogent environmental policies. A standardized International Patent Classification (IPC) system has been used to, first, construct an index of regulatory stringency, based on regulations that came about between 1985 and 2010; and second, construct a unique cross-country weighted patent dataset for technologies invented in the past two and a half decades.

CHAPTER 1 From Rudolf Diesel and Karl Benz to Henry Ford.- CHAPTER 2 Crisis in Californian and the electric car controversry.- CHAPTER 3 Changing Dynamics of the Industry.- CHAPTER 4 Environment, health and new technologies.- CHAPTER 5 Role of the state and regulatory instruments.- CHAPTER 6 Where do Brazil, India and China stand?.- CHAPTER 7 Insights from the world of patents.- CHAPTER 8 What can policymakers and the industry expect by 2020?.

Bharadwaj, Ashish
Dr. Ashish Bharadwaj is Assistant Professor at the Jindal Global Law School (JGLS), O.P. Jindal Global University and Co-Director of Jindal Initiative on Research in IP & Competition (JIRICO)-a think-tank focused on frontline research on issues at the interface of high technology innovation, patents and competition. He is Assistant Director of the Centre for Intellectual Property & Technology Law, and the founding Editor of the Law & Policy Brief. He writes extensively on the role of technology and innovation in shaping societies, licenising of standard essential patents, national IPR and innovation policies. He is an affiliated faculty at the Center for Intellectual Property Research, Maurer School of Law, Indiana University (Bloomington), USA and a visiting associate professor at the Institute for Innovation Research, Hitotsubashi University (Tokyo). He holds a Ph.D. from the Max Planck Institute for Innovation and Competition (Munich); European Master in Law and Economics from Erasmus University Rotterdam (Netherlands), University of Hamburg (Germany) and University of Manchester (U.K.); Master in Economic Sciences from Madras School of Economics, Anna University; and a B.A. Honors in Economics from Delhi University.