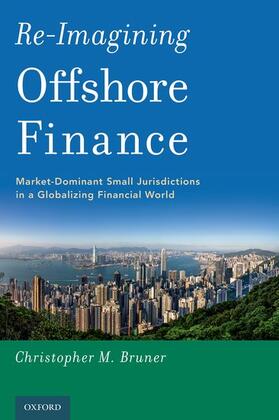 Small jurisdictions have become significant players in cross-border corporate and financial services. Their nature, legal status, and market roles, however, remain under-theorized. Lacking a sufficiently nuanced framework to describe their functions in cross-border finance - and the peculiar strengths of those achieving global dominance in the marketplace - it remains impossible to evaluate their impacts in a comprehensive manner.

This book advances a new conceptual framework to refine the analysis and direct it toward more productive inquiries. Bruner canvasses extant theoretical frameworks used to describe and evaluate the roles of small jurisdictions in cross-border finance. He then proposes a new concept that better captures the characteristics, competitive strategies, and market roles of those achieving global dominance in the marketplace - the "market-dominant small jurisdiction" (MDSJ). Bruner identifies the
central features giving rise to such jurisdictions' competitive strengths - some reflect historical, cultural, and geographic circumstances, while others reflect development strategies pursued in light of those circumstances. Through this lens, he evaluates a range of small jurisdictions that have
achieved global dominance in specialized areas of cross-border finance, including Bermuda, Dubai, Singapore, Hong Kong, Switzerland, and Delaware. Bruner further tests the MDSJ concept's explanatory power through a broader comparative analysis, and he concludes that the MDSJs' significance will likely continue to grow - as will the need for a more effective means of theorizing their roles in cross-border finance and the global dynamics generated by their ascendance.