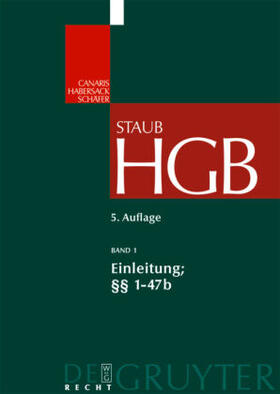 Staub, HGB, is one of the oldest German language commentaries on commercial law; the first edition was published in 1893. It offers one of the most extensive and complete presentations of commercial law, including numerous related fields of law. In addition to the Commercial Code (excluding Maritime Law), the most recent edition includes an extensive portrayal of accounting tax law as well as bank contract law, the CMR (Convention on the Contract for the International Carriage of Goods by Road), transportation law, including the German Freight Forwarders' Standard Terms and Conditions (ADSp.) and additional general terms and conditions of transportation law. Its reputation is based, above all, on its scientifically grounded yet hands-on commentary that is guaranteed by the accomplished and well-known editors and authors from the fields of legal practice and scientific research that contribute to the commentary.