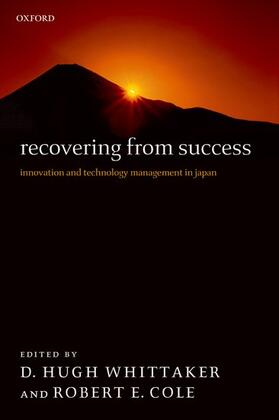 Innovation and Technology Management in Japan

How did Japan fall from challenger to US hegemonic leadership in the high tech industries in the 1980s, to stumbling giant by the turn of the century? What is it doing about it? This book examines the challenges faced by Japan's high tech companies through successful emulation of some of their key practices by foreign competitors and the emergence of new competitive models linked to open innovation and modular production.

High tech companies were slow to respond, relying at first on formulae which had worked in the past, but in a new environment, some of these traditional strengths had now become sources of weakness. Stability and success, moreover, had decreased their appetite for risk. Early in the new century, however, there were signs of a more concerted response, which opened up past practices to scrutiny, and modification through selective learning and adaptation of the new models. The 'MOT' (management
of technology) movement provided a vehicle for this change. It was linked, in turn, to efforts to change the national innovation system, giving universities a more central role, and encouraging spin-offs and startups.

The book features contributions from Japanese and Western scholars and practitioners who have distinctive insights into the nature of these challenges and responses, with substantial introductory and concluding chapters. The result is a highly accessible account of innovation, technology, and change management in the world's second largest economy.

Whittaker
Robert E. Cole served as Co-Director of the Management of Technology Program at the Haas School of Business from 1997-2006. He is a long term student of Japanese work organization, the auto industry and the Japanese quality movement and has published widely on these topics over the last 35 years. Most recently, he has been working in the hitech arena. Prior to moving to UC Berkeley in 1991, he was Professor of Sociology and Business Administration at the Universityof Michigan for 24 years.D. Hugh Whittaker gained his Ph.D from Imperial College, London, and taught at Cambridge University for twelve years before moving to Doshisha University in 2002 as a founding faculty member of Doshisha Business School. He helped to establish and is currently director of the Institute for Technology, Enterprise and Competitiveness (ITEC) at Doshisha University, designated a Centre of Excellence by Japan's Ministry of Education in 2003. He is author of numerous books and articles on Japaneseand comparative industry and management, including Small Firms in the Japanese Economy (Cambridge University Press, 1997), and with T. Inagami, The New Community Firm: Employment, Governance and Management Reform in Japan (Cambridge University Press, 2005).