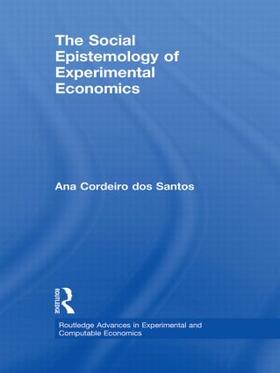 Any experimental field consists of preparing special conditions for examining interesting objects for research. So naturally, the particular ways in which scientists prepare their objects determine the kind and the content of knowledge produced. This book provides a framework for the analysis of experimental practices - the Social Epistemology of Experiment - that incorporates both the ‘material’ and the ‘social’ dimensions of knowledge production. The Social Epistemology of Experiment is applied to experimental economics and in so doing, it introduces the epistemic role of the participation of human subjects in experiments and the causal efficacy of institutions in constraining and enabling human behaviour. It also develops the role of the social and socially established practices in overcoming the methodological difficulties associated with experimenting with humans subjects in the social sciences as well as the effect of scientists’ interventions in the laboratory worlds.

This book provides an historical and contextualized account of the emergence of experimental economics, the methodological discussions that have informed and constituted it, its main research programmes, and stylized facts. The analysis of its three main research programmes – market experiments, game theory experiments and individual decision-making experiments – shows how economics experiments are particularly tailored to produce knowledge about market institutions and individual behaviour in contexts where there might be conflicts of individual and social goals, and also about the processes of individual decision-making.