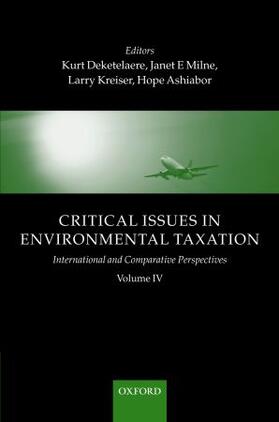 Professor Janet E. Milne teaches environmental tax policy and land use law at Vermont Law School, one of the leading law schools for environmental law in the United States. She is the founder of the law school's Environmental Tax Policy Institute. She previously served as tax legislative assistant to United States Senator Lloyd Bentsen, advising on matters he handled as Chair of the Senate Finance Committee, and was a tax attorney at Covington & Burling in Washington, D.C. She was a
judicial clerk for Frank M. Coffin, Chief Judge of the United States Court of Appeals for the First Circuit, and received her J.D. from Georgetown University Law Center, where she was an editor of the Georgetown Law Journal.

Larry Kreiser, Ph.D., CPA is Professor Emeritus of Accounting and former Chairperson of the Department of Accounting at Cleveland State University, Cleveland, Ohio USA. Prior to CSU, he was on the faculty at the University of Detroit, University of Cincinnati, and Wright State University. He has also worked at Deloitte & Touche, CPAs and the Naval Audit Service in Washington, DC. Dr. Kreiser has held Visiting Professor positions at Deakin University in Geelong, Victoria, Australia and
the Naval Postgraduate School in Monterey, California. During his professional career, Dr. Kreiser has been an author on over fifty professional publications and has made over thirty professional presentations at conferences around the world. He is a contributing author on two widely-used US Federal
Taxation textbooks.

Hope Ashiabor is an Associate Professor of Law at Macquarie University, Sydney, Australia, where he teaches taxation law and international tax. He was engaged as a consultant to the OECD Environment Directorate on a project dealing with border tax adjustments and environmentally related taxes, and on an Ausaid project with the Fiji Islands Inland Revenue and Customs Department on an international transfer pricing project. He hosted the Fourth Annual Conference on Environmental Taxation Issues
in Sydney in 2003. He has written extensively and prepared public submissions on different aspects of the role of fiscal instruments in managing the challenges of environmental degradation. Prior to joining Macquarie University, Hope worked as a State Attorney with the Plateau State Ministry of
Justice, Nigeria. Before that he was an in-house counsel with a commercial bank.